Are you looking for fun ways to develop your child’s number sense and early math skills? Although there are countless games you could play and dozens of fancy manipulatives you could employ, one of the best and easiest tools to use is a ten frame. Ten frames are a powerful visual that help our brains make sense of numbers. And so when you can combine this handy visual with fun and engaging games? Well, you’ve got a winner for sure! Learn more about the importance of ten frames and an adorable new math card game called ‘Ten Fish’ below. 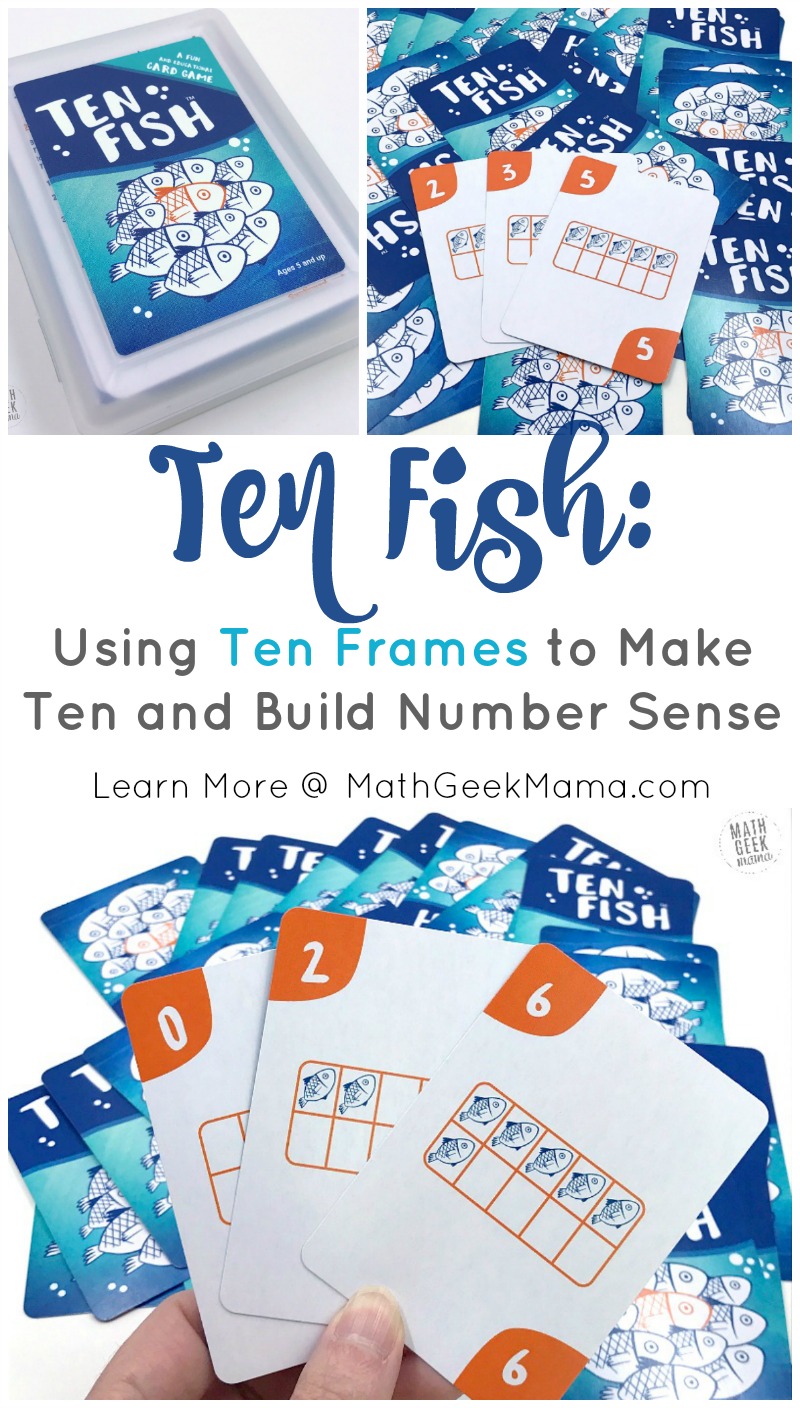 *Please Note: This post is sponsored by Betsy Mays, math teacher and creator of Games by Absolute Zero. I received a copy of the game and was compensated for my time in writing the review. I was not, however, required to give a favorable review. Read our full disclosure here.*

What is a Ten Frame?

Before I discuss the value of ten frames and a new favorite math game we’ve been playing at our house, I want to explain what a ten frame is.

A ten frame is a rectangular box divided into ten empty boxes. It is usually set up as 5 boxes over 5 boxes, although sometimes you may see a long horizontal ten frame, with 10 boxes in a single row.

In other words, it is simply a grid that allows kids to represent quantities within 10.

The organized structure of the frame, however, is what provides the real value and why this visual model is so helpful for our brains to make sense of numbers.

The Importance of Ten Frames:

Our brains learn and make sense of mathematical ideas using five different neural pathways in our brain. As we work on math problems these five pathways ‘light up’ with activity.

What recent research has shown us is that two of these pathways are visual pathways.

This means our brain is using the visual processing parts of the brain when we do math, whether we realize it or not!

Therefore, ten frames can be used to help us visualize numbers and their relationship to the number ten.

This is an essential skill for developing number sense and fluency with numbers.

This is also important for developing mental math skills and understanding place value in our base ten system.

Ten frames are also valuable because they help young kids learn to subitize, meaning they can recognize a quantity without counting.

Then, an amazing thing begins to happen. Kids will then start to recognize 7 as 5 and 2. Or see 7 on the ten frame and know instantly that 7 and 3 makes ten.

There is SO much amazing math development that goes on when kids play with and utilize ten frames.

So, as I mentioned above, ten frames also provide a wonderful visual for kids to see (sometimes by counting, sometimes without having to count) different ways to decompose the number ten.

This is, again, an incredibly important and foundational skill, and one that is strengthened by playing with ten frames.

That’s why I’m so excited to share a new game with you called, ‘Ten Fish.’ It was created by a math teacher, who understands the importance of ten frames and how they can help develop early math skills.

Ten Fish is a card game similar to the classic game, ‘Go Fish,’ but instead of looking for matching pairs, you look for ‘ten fish’ (in other words, sets of ten). 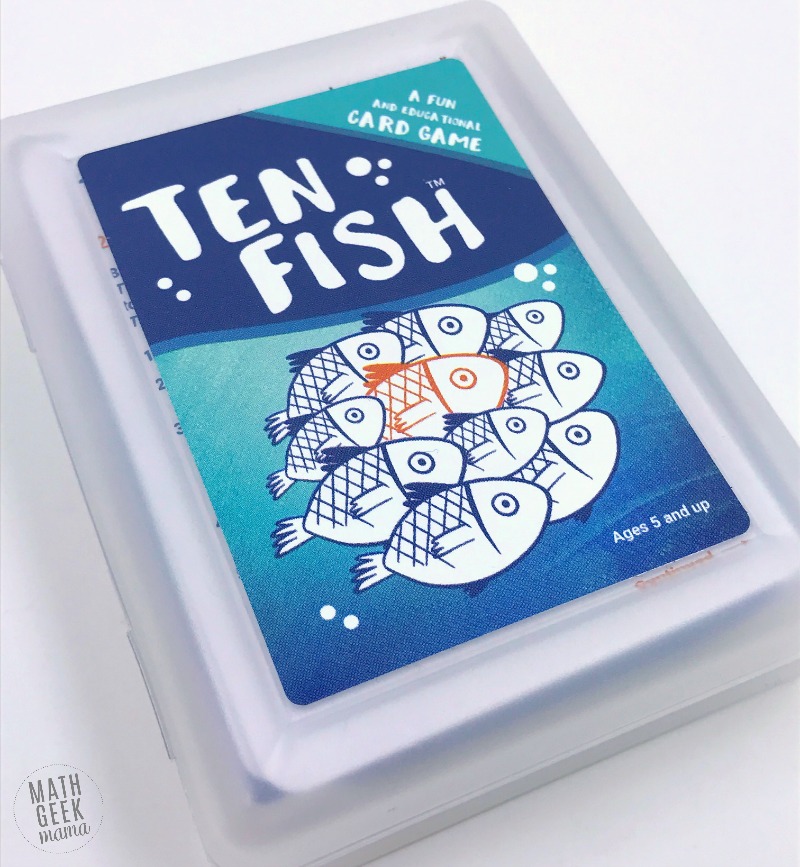 Because the game is so simple to set up and play, it’s a really fun and easy game to play together as a family or incorporate into your classroom. No long directions or set up required: all you need is the deck of cards!

Watch this quick video for an overview of the basic game directions:

One of the reasons that I love this game is that it is a low-floor, high ceiling math game.

Low floor means that it is very easy to pick up and play, even for the youngest learners. The reason is that each card includes a numeral, and also a ten frame representing that quantity.

So my youngest (kindergarten) is able to find ways to ‘make ten’ using the ten frame to count the other ‘part’ of the ten: 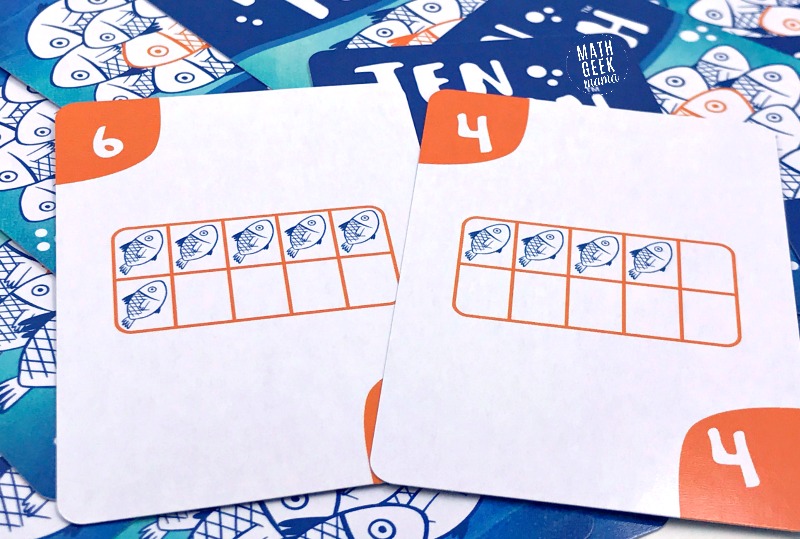 She absolutely loves it, and is already strengthening her understanding of addition and beginning to recognize some of the pairs that equal ten without counting.

However, this game can also be more challenging for older kids, because you can combine any of your cards to make ten. 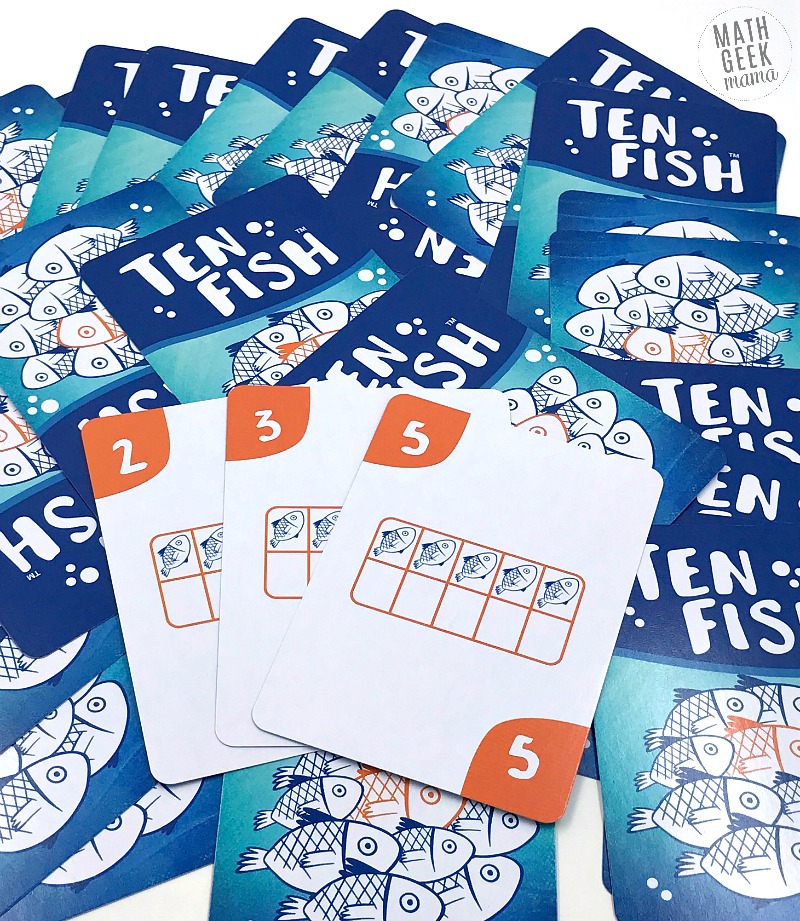 Another simple game variation you can play with these cards is ‘What’s the Difference?’

To set this up, the entire deck is dealt between two players. Players then flip over two cards simultaneously and find the difference between their two numbers.

Using the ten fish cards, they can use the ten frame visual to help them.

You can also (and I recommend this) place a number line or number path in the center of the game to help kids understand subtraction as the difference between two numbers rather than simply ‘take away.’

Then the player with the biggest different wins all 4 cards for that round.

The player with the most cards after all has been played wins!

And if you have even older kids, I think a really fun challenge would be to ask them, “How many ways can you make ten with the given deck of cards?”

The cards include a ‘contents’ list, so using this list, and some criteria such as, “How many pairs will make ten?” or “How many groups of 3 cards will make ten?” see who can figure out the total number of sets that are possible. 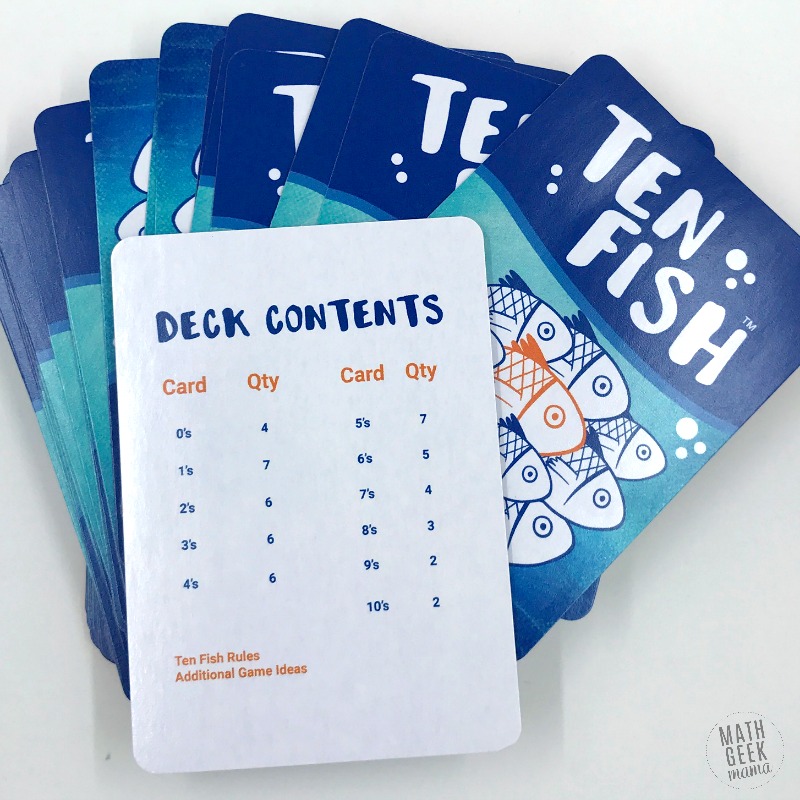 Or you can open it up and give them no criteria at all, but see who can figure out the largest number of sets you could create with the given deck of cards.

You could also challenge kids to find sets of some other number, like 15, and play the original game.

I like to use ten frames to teach the teen numbers, so this game could be played that way to work on teen numbers as well.

I am sure we’ll be enjoying this game and the many, many variations for quite some time. 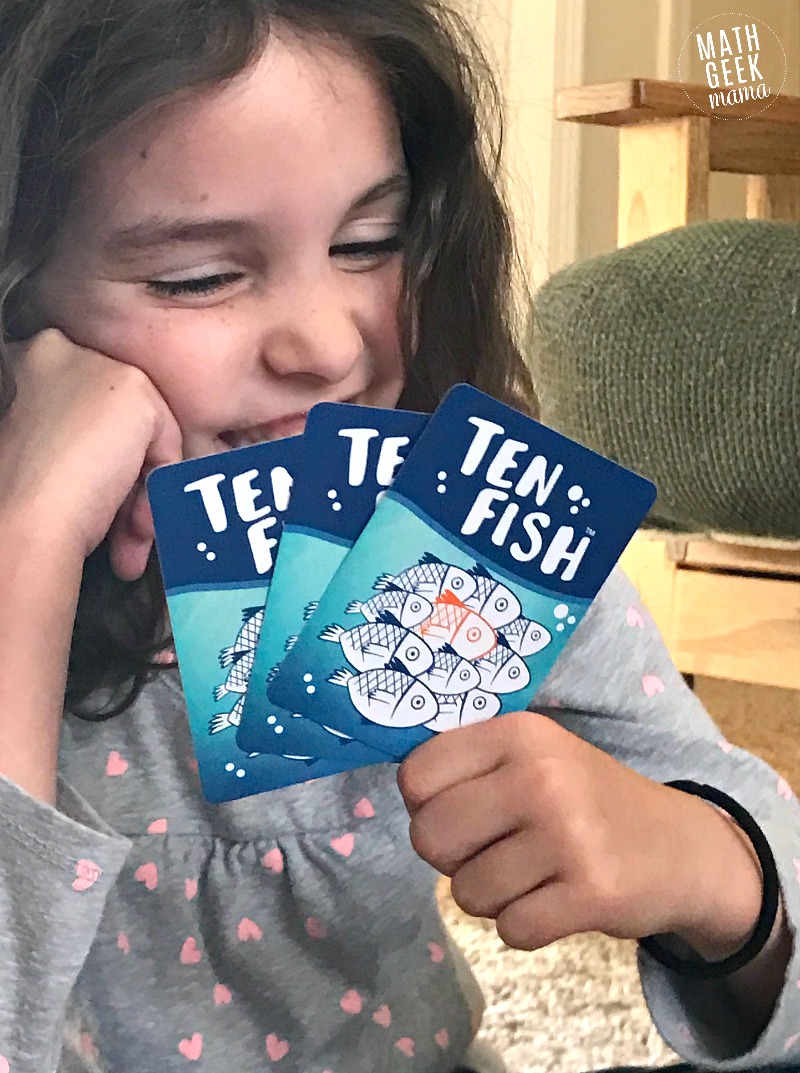 Are you interested in grabbing a deck or two of this game for your home or classroom?

See all the games available on their Amazon storefront here.

This would also make an excellent end of the year teacher gift for your child’s teacher!

I hope you and your kids have fun playing ‘Ten Fish’ and deepening your understanding of addition! 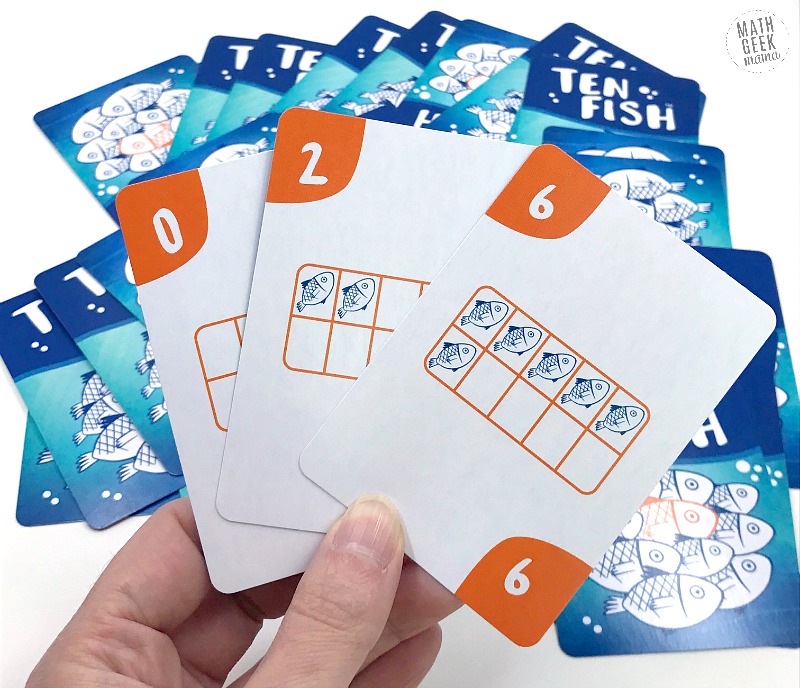