Now, I don’t share this because I have all the answers, or because this is the only method to use, or because I think it will work for every single kid out there. (Next year I’ll be teaching my son, and may come back with another post using a completely different approach).

But so far, this has worked well for my daughter (second grade), and some kids I tutored who were behind (4th grade). 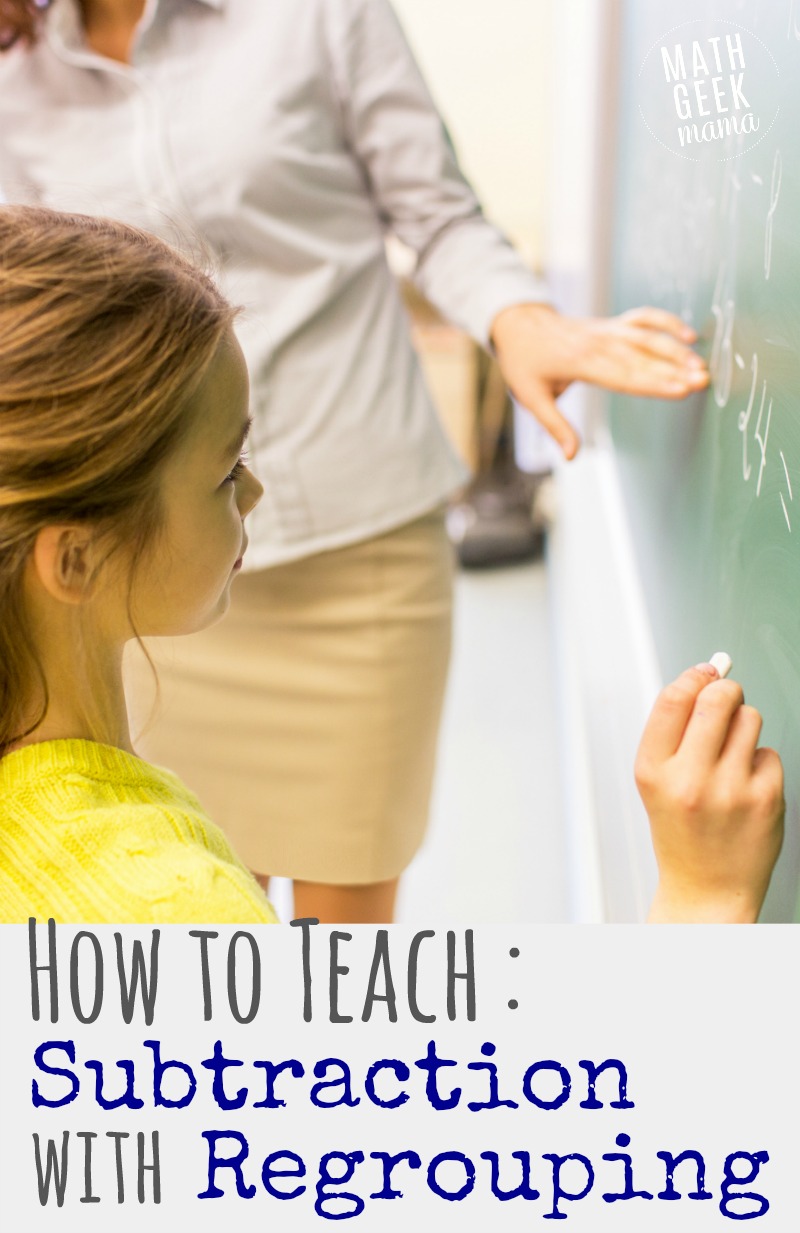 How to Teach Subtraction with Regrouping:

First of all, I believe that the most effective math teaching strategies do several things. One, they start with visual or hands-on models (concrete) before moving to the more abstract (like formal algorithms). And two, they start by connecting something the child already knows to what is being taught.

So I begin with one of my most favorite math manipulatives: money. 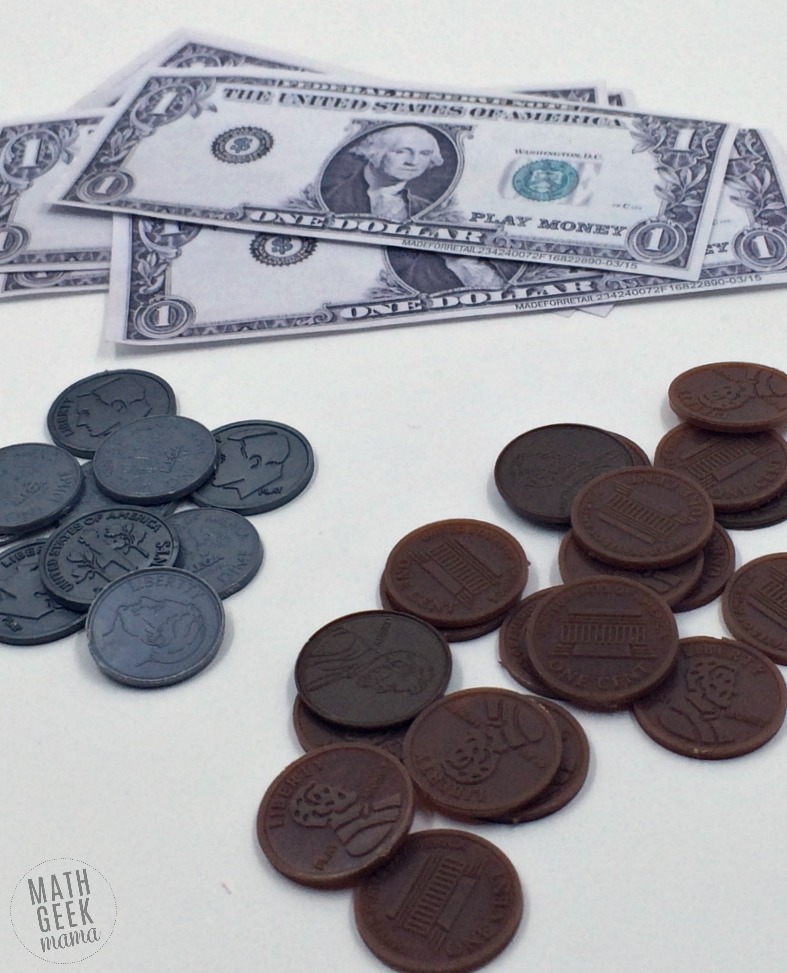 Kids in second or third grade should be familiar with counting coins, especially dimes and pennies (which is what you need to get started).

They will also need to have a good understanding of equivalencies, meaning how many pennies are in a dime and how many dimes are in a dollar.

(If they aren’t comfortable with those facts, you’ll need to start there).

I begin by telling my daughter that she’s going shopping. But she can only buy items with exact change.

I then give her some play money (say, 4 dimes) and tell her she can choose what she wants to buy. So we have some fun, and she decides to buy a doll.

Then I tell her the doll costs $0.24. When she tries to give me 3 dimes, I remind her that she has to pay with exact change.

This is where the problem comes in, and we have to find a solution. She realizes that she doesn’t have any pennies, so we talk about it, and discover that a dime is equal to 10 pennies.

I then explain that I am also the bank, and at the bank you can exchange money. I then show her how I will give her 10 pennies if she gives me a dime.

We then count to figure out how much money she has left.

The first day or two, we did this with several examples, and really made a game out of it, but never wrote anything down.

I didn’t want to jump right into the formal math equation or algorithm, because I didn’t want her to get bogged down or confused. I simply wanted to reinforce an understanding of place value, and help give her an idea of what’s happening when we “regroup.”

Making the Connection to Subtraction of Large Numbers:

After this initial introduction, I begin by writing a subtraction problem down. Say, 62 – 38.

I would then explain, we’re going to solve this by modeling with your dimes and pennies. Pretend 62 is the amount of money you have, and 38 is the cost of the toy you want to buy.

So she would first build 62 out of dimes and pennies. 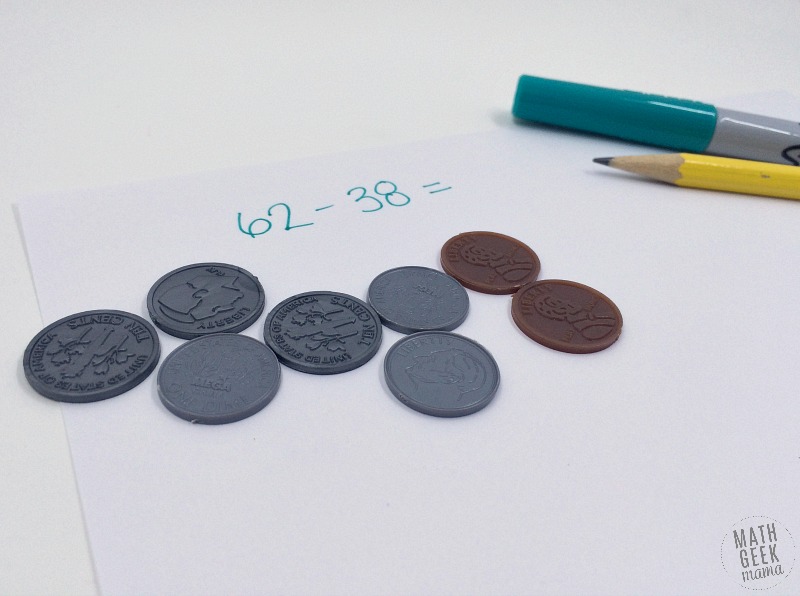 When she realized she didn’t have enough pennies, we would go through the “exchanging with the bank” process.

Many times in the beginning, she would start by saying, “Can I have ten pennies, please?” And I would have to remind her that the bank doesn’t just give you money. You can’t just have more. You can, however, exchange a dime for the equivalent number of pennies.

They’re not making a new number.

So I really stressed over and over that the amount of money she has (in this case, $0.62) can’t change. It can only be made a different way. 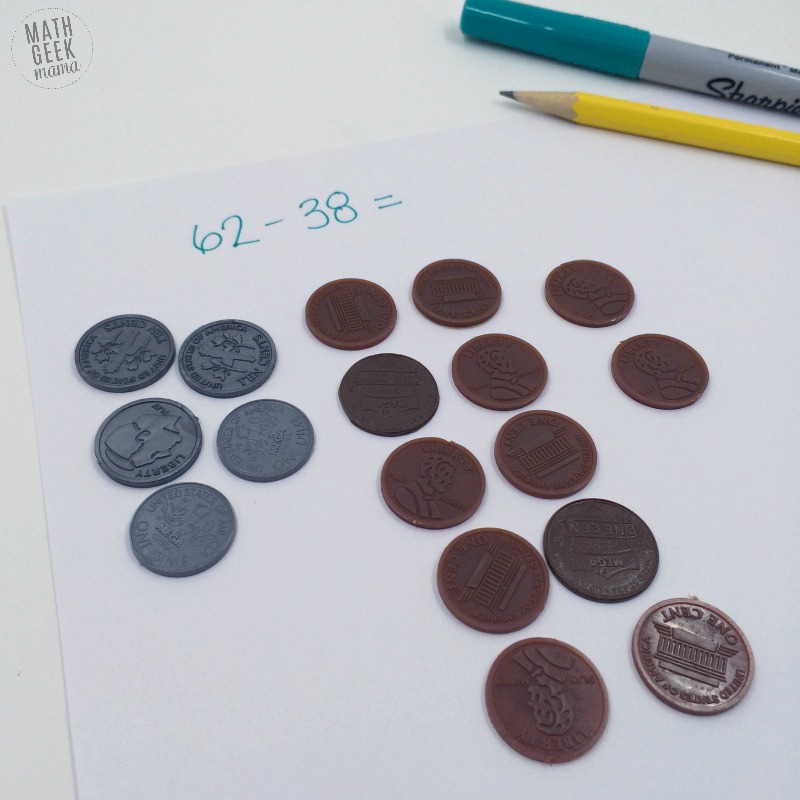 She then pays me with the exact amount, and we count what’s left.

Then, we go back to the original subtraction problem (62 – 38 = ) and write down the solution. 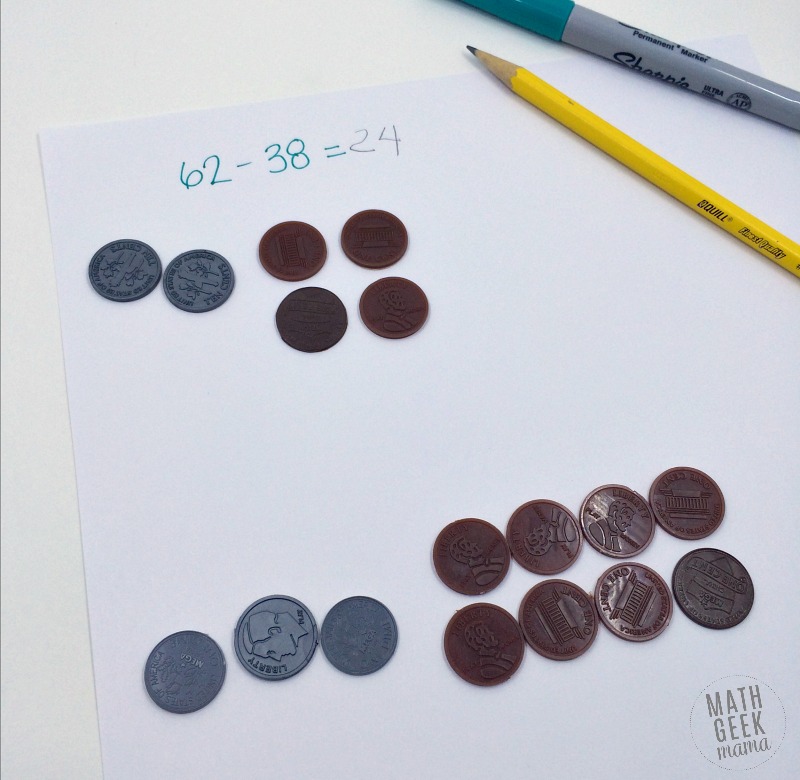 We then spent a week(ish) solving subtraction problems by building them with dimes and pennies. She would exchange her dimes from the bank when necessary, and then subtract the right amount and calculate what was left.

Then she would write down the answer to the problem.

She was able to solve just about every subtraction problem I gave her (we also moved to 3-digits using dollars, dimes and pennies) without ever writing anything down.

Transitioning to the Formal Algorithm:

Once I felt like she really understood the process and was comfortable with why she was doing what she was doing, I began to show her how to write down the steps on the problem itself.

So we would still start by taking a subtraction problem and building it with dimes and pennies. 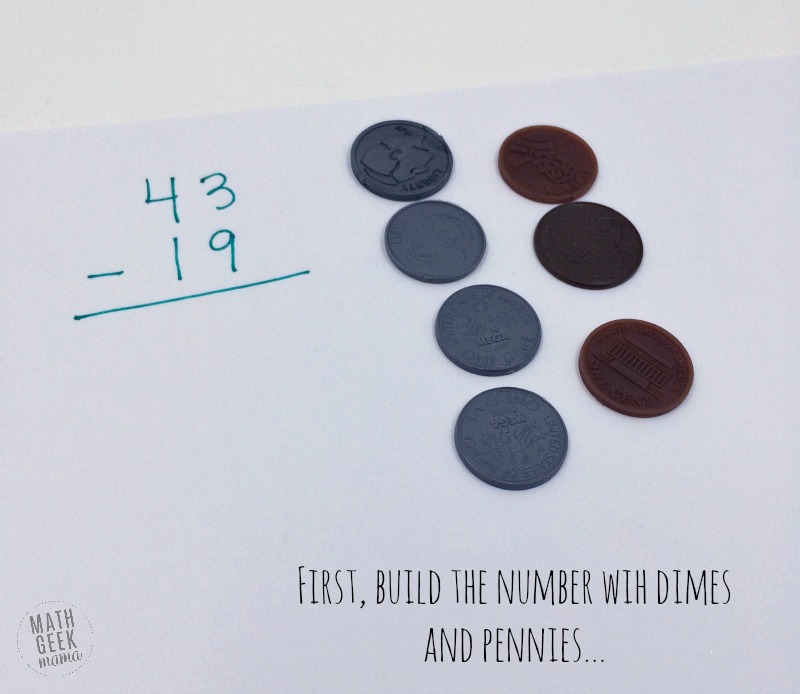 But after she did the first step (exchanging a dime for 10 pennies) I would change her problem to show that there was now one less ten, and ten more ones.

Then we would subtract the ones and I would write the answer in the ones column.

Then we would do the same with the tens. 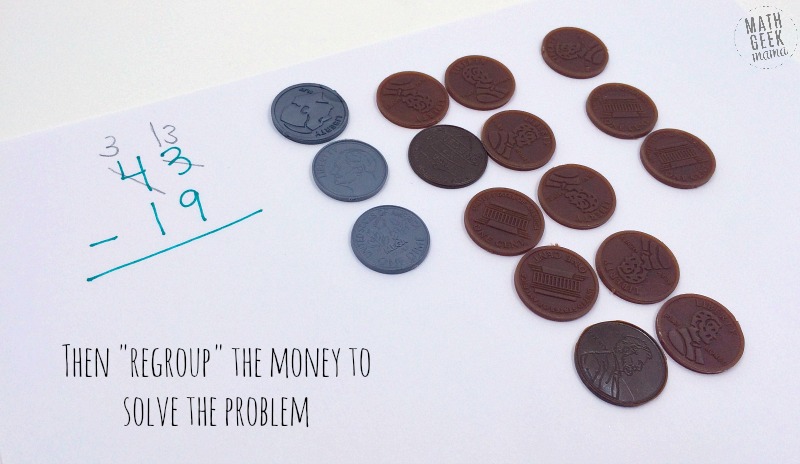 We continued to take it one step at a time, solving with the money, then writing what happened on our paper.

We had to work through a lot of examples this way before she was able to begin writing the steps out on her own.

Eventually, though, I was able to give her a problem, and challenge her to solve it completely on her paper, without using the play money.

When she got to that point, we then spent a lot of time simply practicing and getting used to the formal algorithm.

Then we looked at 3-digit numbers such as 400, and learned that she could exchange $1 for 9 dimes and ten pennies, so she only had to “exchange money” one time. 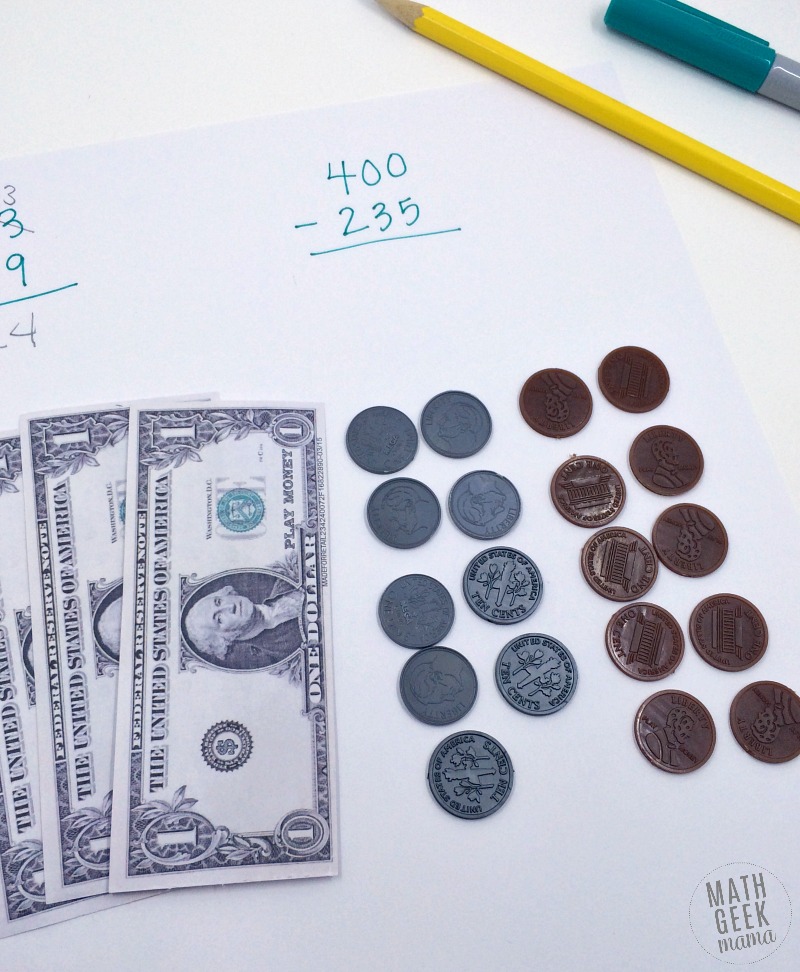 Overall this process took about 4-5 weeks. And I know that some of you classroom teachers don’t have the luxury of spending 4 or 5 weeks on subtraction. But I believe if you spent time explaining the method to parents so kids can get reinforcement at home, you could get through it faster.

So to sum up, subtraction with regrouping in 3 steps:

I went through this process back in the fall, and today asked my daughter how she feels about subtracting large numbers.

She still felt completely confident that she not only could still subtract with ease (we’re now working on early multiplication and division) but that she understood the process and could explain it.

When we’re ready to go back to addition and subtraction, we’re going to work on some mental math strategies. But I felt like giving her a solid foundation with regrouping and a deeper understanding of place value was the best place to start.

So, again, this is not a one-size-fits-all solution or strategy. But I do feel like it’s a really great way to help kids make sense of these very challenging math problems, and develop a stronger number sense and place value understanding.

And if you have older kids who still just really struggle with subtraction and regrouping, you will definitely want to check out this post with some additional tips. What may be easier for some kids is to avoid regrouping altogether. 😉

Looking for more practice: Try one of these subtraction games:

Thoughts? Do you teach subtraction with regrouping differently? What other advice would you offer parents and teachers?