As I have mentioned before, I’ve tried out a handful of math curriculum with my children. I used Math-U-See for Kindergarten with my daughter and now I’m using Singapore for first grade. I love both of these curricula, but after starting my son’s kindergarten year with Math-U-See, it quickly became apparent that it was not challenging enough for him. In an effort to challenge him and change things up, he’s been using the online math program, Redbird Mathematics, from GiftedandTalented.com for the last 3 months. Today I hope to give you a thorough overview of our experiences of the Redbird Mathematics Online Math Program. 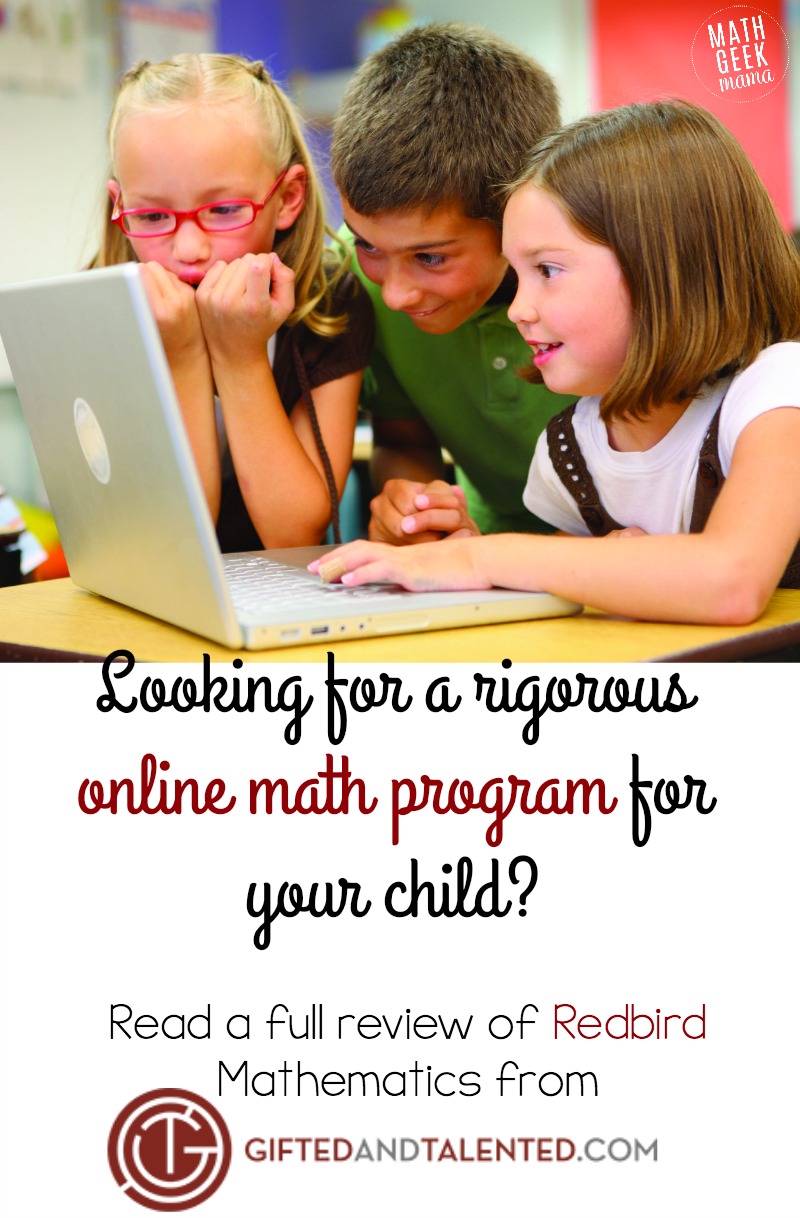 *Please Note: I received a free 3 month trial of this program and have been compensated for my time in reviewing this product. All opinions, however, are completely my own, and I was not required to give a positive review.*

First, a little about GiftedandTalented.com:

If you are not familiar with GiftedandTalented.com, you may be surprised to learn that they do not see themselves as a resource only for gifted learners, but rather, their goal is to help students of all abilities become advanced learners:

“We believe the term gifted should be the destination and not a labeled starting point.”

Another thing you should know is that all of their programs are created in partnership with Stanford University and are research based. So while the approach or questions may sometimes seem difficult or different from other math programs, it is based on research of how children best learn math.

Things We Liked About the Redbird Mathematics Online Math Program:

This was a nice change of pace for my son, and he loved being able to do part of his schoolwork on my laptop or iPad. Even though the math was challenging, it almost seemed like a game to him (and occasionally there are fun games thrown in). I also liked this aspect because it meant no textbook or workbook. Everything was online, and the program kept track of where he was and what he still needed to work on.

2. It pushed and challenged my son

As I mentioned, Math-U-See is great, but the Kindergarten level was not nearly challenging enough for my son. And since he loves math and problem solving, I was glad to have a self-paced program that could challenge him. Rather than being bored because the problems are too easy, it would push him onto another more challenging concept.

3. The pace and progression of the curriculum

This program offered multiple representations of numbers and asked questions several different ways before moving on to new concepts, and I liked the way various topics were explored.

This is a research based program which (in my opinion) seeks to help develop students’ number sense and conceptual understanding of mathematics. Because of this, however, it may look different from other curriculum that you may use or more traditional math instruction that you may be familiar with.

I believe this is a good thing, though, so if you would like to try this, just know it may take some getting used to.

4. It is based on his performance

The program is intuitive, so if he gets questions wrong, it continues to give him new questions around that concept rather than moving on. I appreciated this because I wanted him to try and do some of the problems on his own (often I would sit and talk through the problems with him). I could let him work independently from time to time knowing that it would not let him move onto adding to ten if he had not mastered adding to 5.

5. It helped my son with reading and language skills

This is completely unrelated to the math content, but a nice bonus for my son (who is learning to read) is that he began to see and recognize new words. There is a button to press which will read the question aloud (because my son couldn’t read it) and I began to notice that after listening to the questions for a while, he was picking up some of the words. He also learned new math vocabulary such as greater than and less than.

6. There are fun games mixed in

Typically, the program presents various math problems and he has to answer the questions. Every once in a while though, it would bring up a game to allow him more practice and he thought these were so fun!

Why Redbird Mathematics Online Math Program Might Not Work for You:

1. You don’t have reliable internet or a device to use

If you have very slow or unreliable internet, you may have trouble accessing this program easily and consistently. Or if you don’t have access to a computer or other device, you won’t be able to use this, as it is entirely online.

2. Your Child Struggles with Math or is “Math Anxious”

As I’ve said, this program is likely going to be different than other math curricula that you may be used to, and may seem incredibly challenging, especially if your child is older and used to a more traditional approach.

I don’t think that’s a bad thing, but you might feel like it’s not right for you and your child for that reason.

Instead, if your child struggles, I would suggest starting them 1-2 grade levels below where you think they are.

This will help them get used to the program and the format and build their confidence before moving on to the more challenging math concepts.

Remember, the goal of GiftedandTalented.com is to help all students become advanced learners.

Because my son is 6, we started with the Kindergarten level of Redbird Mathematics. I quickly noticed, however, that he was often learning and working on problems similar to my daughter (who is a year ahead).

So Who IS Redbird Mathematics For?

One final note about the Redbird Mathematics Online Math Program:

The program I have used and tested with my son is an independent learning track. It is self-paced and while intuitive to meet his needs, there is no additional help if he gets stuck or has questions.

If you would like your child to have the opportunity to be pushed and challenged in this rigorous math program, but do not feel confident that you can help them when they need it, there is also a tutor supported option. This would be a great option is you want even more personalized help and attention for your child to ensure that they succeed with this program.

Please also note that we have only used the Kindergarten level, but this program is K-7. I have not actually used any of the upper level courses.

Want to try the Redbird Mathematics Program for Yourself?

I suggest subscribing to the GiftedandTalented.com e-mail to be informed of special offers and deals to make this online math program more affordable for you.

Here are other ways you can follow GiftedandTalented.com to keep up with them and their unique online learning programs:

Have you and your child tried this program? What are your thoughts? What would you like other parents to know? If you haven’t tried this, what questions do you have?