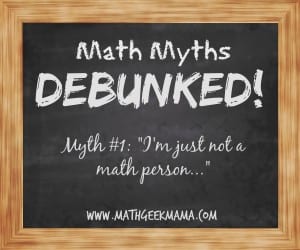 I’ve heard the cop out from students and parents alike. The excuse that’s given and accepted as truth before a student even sets foot inside my classroom. As if there is some specific, genetic trait that has simply been lost to them. There is therefore no hope, so they shrug it off and just hope to goodness I am nice enough to let them pass.

“I’ll never catch on or do well. I’m just not a math person.”

Well, I have news for you! Neither am I! I struggled in Algebra 1 with a teacher who moved quickly and was unapproachable. And even though I made it through and went on to take Calculus, the only reason I took that was to prove myself to other students in the school (not because I was some sort of math genius). And then in college, there were many, MANY classes that were way over my head. I am not a “math person.”

But the great and exciting thing is that while some people may have strengths in math and science and others may struggle, EVERYONE, (seriously, everyone!) can learn math!

There is not some rare “math gene” that gets passed to some people and not to others. Math is not a talent. It is a skill that can be learned with hard work and perseverance. Sure, some people may understand more quickly than others, but that doesn’t mean that it is an impossible feat for everyone else.

Learning math takes time and practice and hard work. Do not be discouraged just because someone else “gets it” in 5 minutes. You are not them! You may need to approach the problem from a different angle. Use some other problem solving method. Employ some trusty “trial and error.” And that’s ok! Everyone’s brain is wired differently, and you need to find what works for you, even if it means spending more time on your homework than your friend.

It is also vital to remember that all math, from kindergarten on up, builds on itself. Therefore, if you miss something, or didn’t catch that one important “trick,” or never quite got that one concept in your brain, you’re going to struggle later! Guaranteed! It does not mean that you aren’t smart, or that you’re just “not a math person.” It simply means that there’s a gap somewhere that needs to be filled in so that you can move on confidently and successfully.

Do not be discouraged. Just press on and know that if you are willing to put in the time and energy, you too can learn math and feel ready to tackle anything!

Parents, do you perpetuate this kind of thinking in your child? Teachers, do you see these kinds of comments and attitudes from students? How do you respond? I’d love to hear your thoughts!