What kid doesn’t love to play games? Any time you can turn math practice into a fun, engaging and competitive game is a win! Especially when all you need to play that game is a regular deck of playing cards

! 🙂 This math card game to make ten is fun and simple! 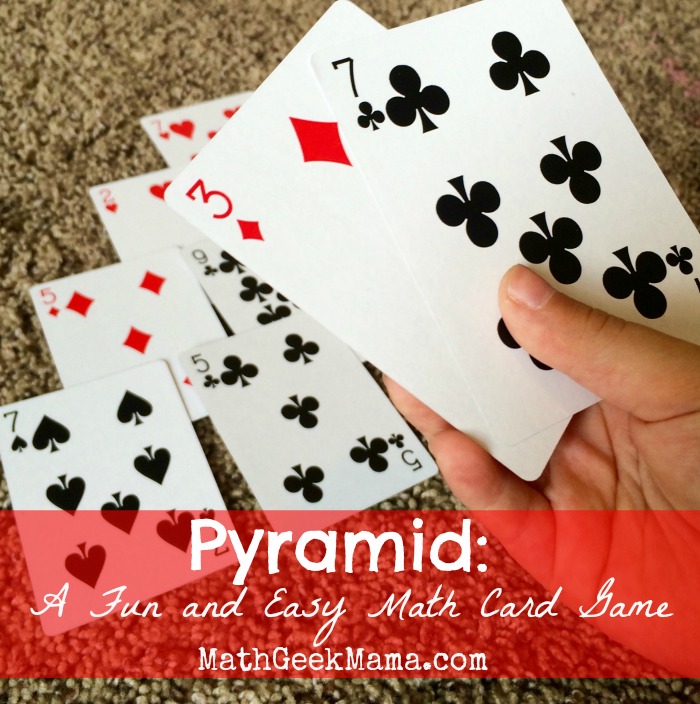 *Please Note: Some of the links in this post are affiliate links and help support the work of this site. Read our full disclosure policy here.*

by Peggy Kaye. This book includes dozens of games to play to make learning math in grades K-3 fun!

The game I’m sharing today is called Pyramid, and helps reinforce addition skills, and learning the number bonds of ten. I think knowing how to “make ten” is an especially important skill for early learners, because it is a helpful strategy to use when adding larger numbers, estimating, counting change and more.

Pyramid is a solitaire style game, but can be played by more than one player by keeping score in each “round.” It reminds me of those little pyramid games on the table at Cracker Barrel where you have to try and remove all but one pin. (Although there is no jumping involved. Just trying to get rid of as many of the cards as you can).

I decided to play this with my daughter recently (age 6) when she wanted to have some “me and Mommy” time. I didn’t say anything about doing math or schoolwork, just said, “How about playing a card game I just learned? It sounds fun!”

Well, she agreed, and we did have a lot of fun! So much so in fact, that after playing (and winning) she said,

“Mommy, do you think we can play this game for school next year? Because that’s like some super good math!”

HA! I LOVE it! “Why yes, dear. I think we probably can play this for school next year.”

To Set Up Pyramid: A Math Card Game to Make Ten

First, remove all face cards (except Ace, which will represent the number one) and jokers from your deck of cards

and shuffle well. Then arrange your cards into a Pyramid with 6 rows, as shown below, with each row slightly overlapping the previous row.

Place remaining cards in a deck, face down, off to the side. 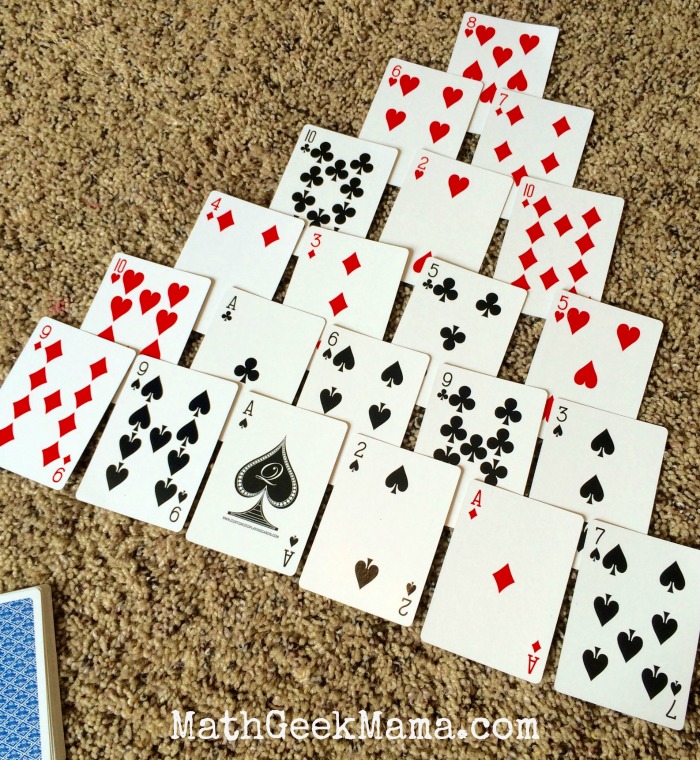 So for example, in the game shown above, I was able to remove a nine and an ace to make ten. 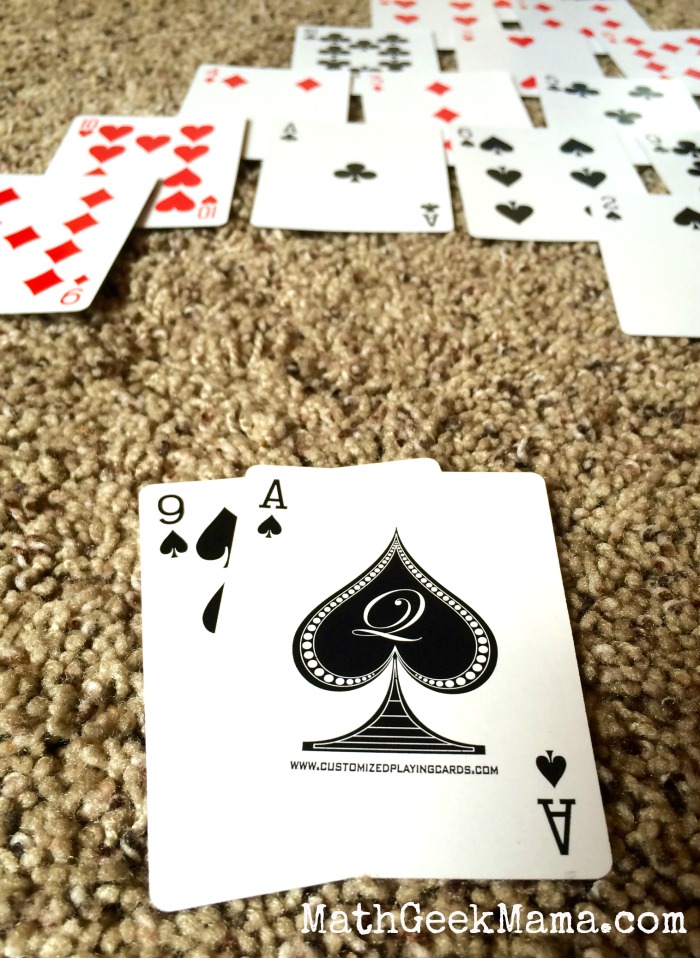 There were actually two nines and two aces in the bottom row, so I did this twice. 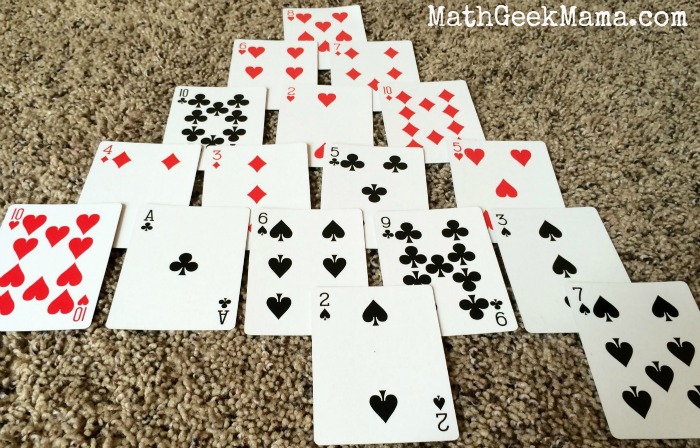 Then, I was able to remove the ten in the next row, because it had been completely uncovered. 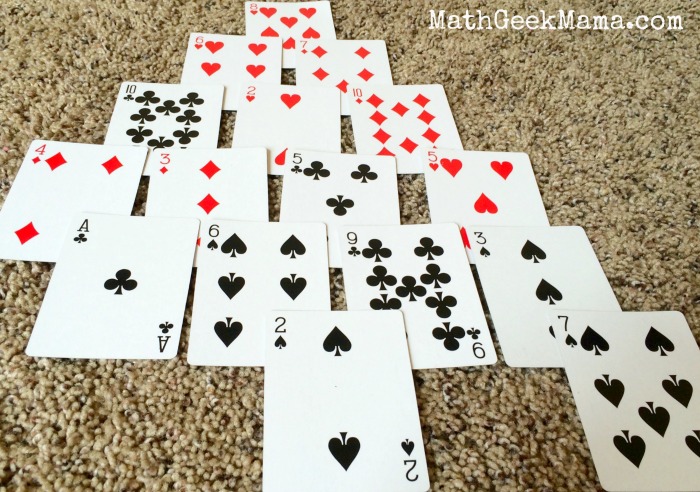 At this point, all that was available was an ace, a two and a seven. No two cards remaining could make ten, but the game is not over! Remember the deck of cards off to the side? These can be drawn from to try and find a needed card. So when there is no other option in your pyramid, draw a card from the deck. 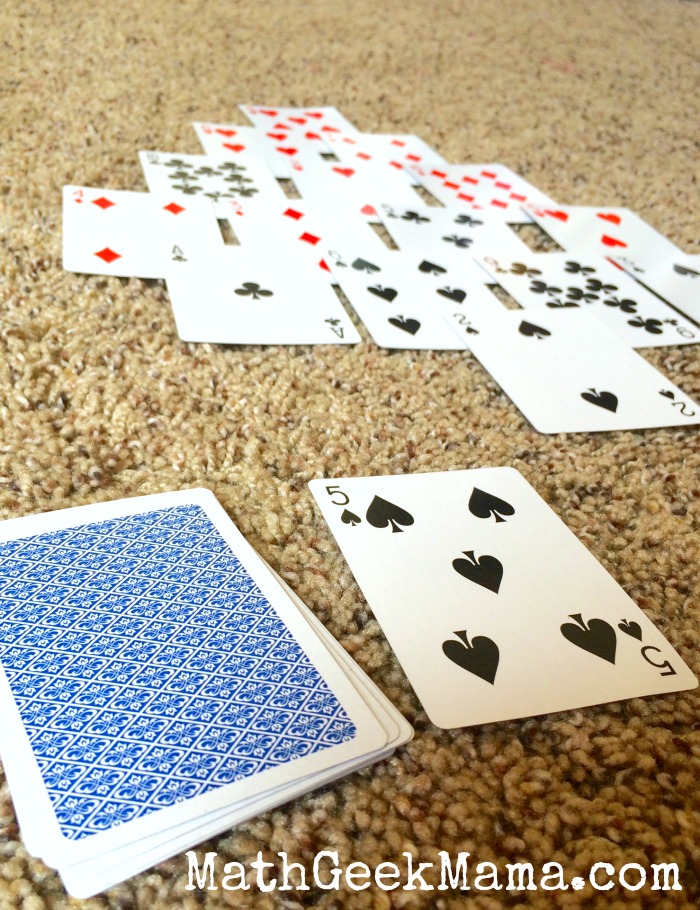 Continue to draw until you can make another ten. Remove those cards, and continue to play in the same way. If you make it through the entire deck, you can flip them over and begin drawing again.

The game is over when you can no longer remove cards from your pyramid.

To Win the Game:

Once you are stuck and can no longer remove any more cards, add all the remaining cards to determine your score. The person with the smallest number wins!

In the game shown above, I played until I got to this point: 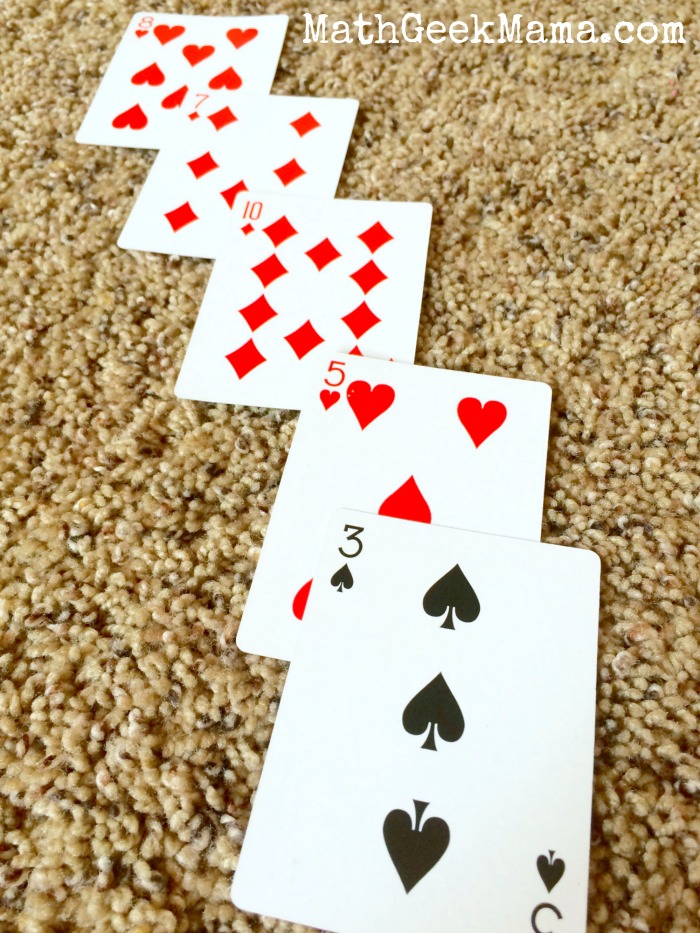 I could do nothing else, because I needed a seven to make ten, but the only remaining seven was further up in my pyramid. Therefore, my score was 33. (This is not very good, in case you were wondering!). My daughter, however, was able to remove all but one card in her pyramid and ended up with a score of 7.

She even noticed at the start of my round that no matter what, she was going to win! Why? Well, as you can see in the pictures, the very top card in my pyramid is 8. So even if I had been able to remove all but one, she still would have won. 😉 She’s a clever one!

I look forward to playing this with both she and her brother, and maybe playing multiple rounds to find a winner!

While playing, ask questions like, “What number do you need with six (or whatever card is open) to make ten?” or “What number and ten makes ten?” or “How many different ways can you make ten with the available cards right now?”

Have a younger one? To make sure this is fun and not discouraging, you might consider giving an “equation sheet” with all the possible ways to make ten for little ones to use when playing. It will still help them learn and recognize the number bonds, while having fun playing the game!

Have fun and go practice some “super good math!” 🙂

Love this game? Want even MORE fun card games that teach your kids important math skills? Check out this post of the 20 BEST math card games! 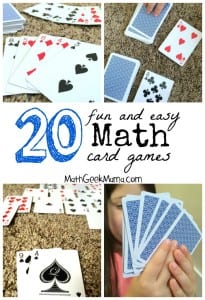 And if you’re looking for more ways to help your kids learn to make ten, try some of these: