I was recently introduced to a company called Mango Math. I was intrigued by the company, because they sell age appropriate math games that are aligned to the Common Core, as well as NCTM Standards. So when they asked if I would review their products, I gladly accepted!

I received two games for this Mango Math product review, and so I will be sharing my thoughts on these games, as well as the company in general.

*Please Note: I received these games free of charge in exchange for an honest review. All views and opinions of the materials, however, are my own. This post also contains affiliate links. Read my full disclosure here.* 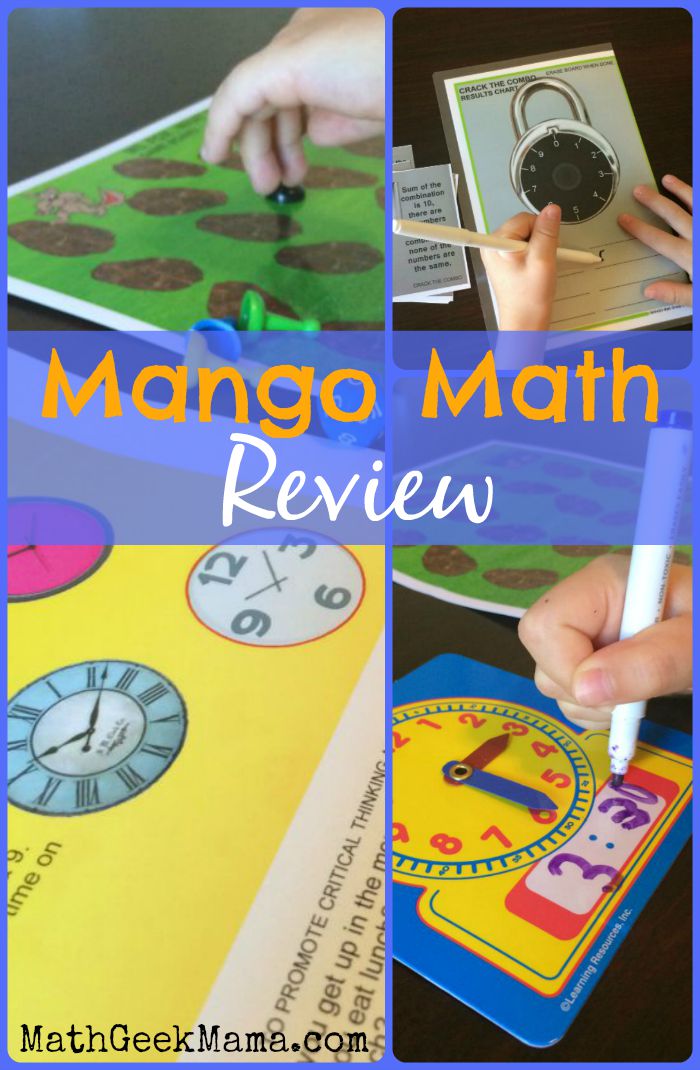 Typically, Mango Math sells an entire crate of lessons and games per grade level, which includes 20 different games and all the materials necessary for up to four students to use them.

I received two of the first grade games, one of which covers telling time, and another which encourages algebraic thinking and problem solving.

Before playing, “Ms. Fox, What Time Is It?” I spent some time reviewing telling time with my daughter. Apparently, she was a little rusty, so it was a great review for her. Then we were able to play the game, which came with instructions, a game board and game pieces. 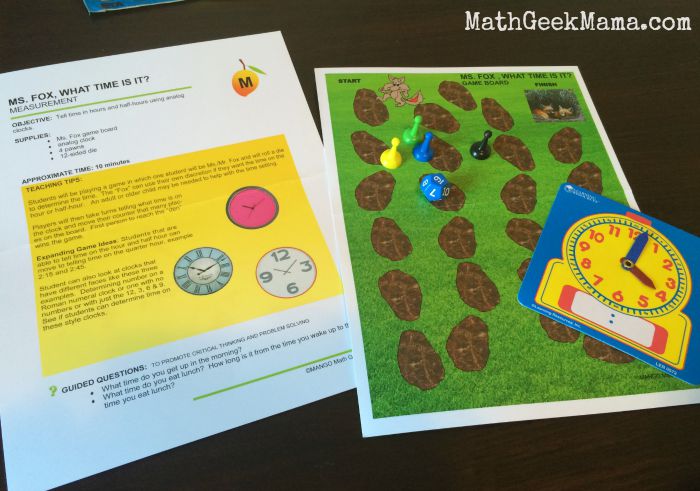 This is a pretty straight forward game, which allowed her to practice telling time, and allowed me to start with easy problems and gradually increase in difficulty.

To play, we took turns rolling the included 12-sided die

, and then using that number to set the time on the clock. For example, if I rolled a 3, I would set the clock to 3:00 or 3:30 (we started with on the hour and half hour until she seemed confident). If she correctly wrote and stated the time, she could move forward 3 spaces on the game board. 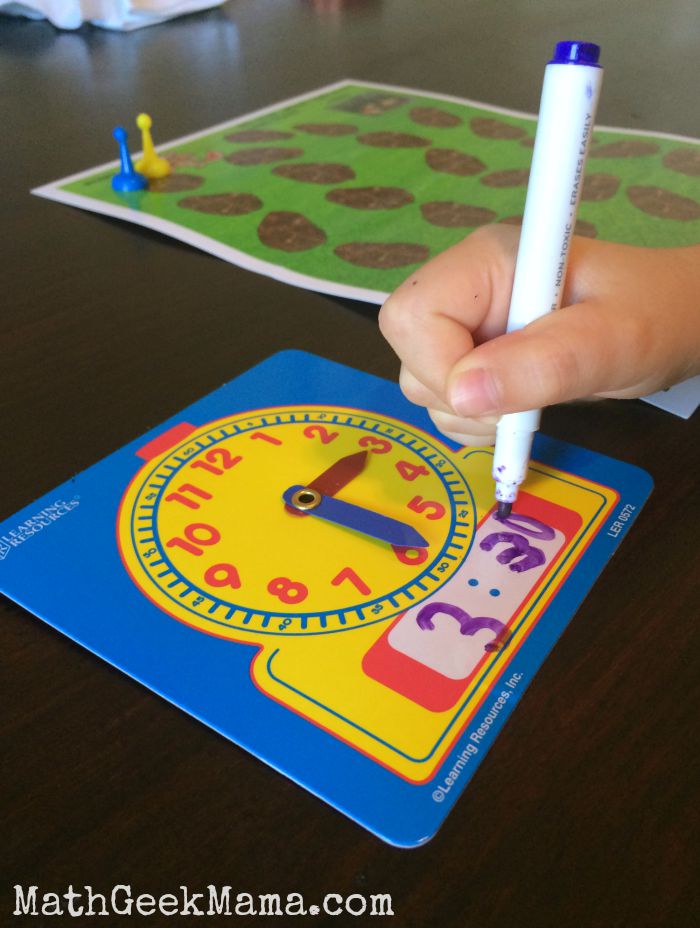 We would then take turns, and I would let her set the time for me, and I would have to write it and say it. This was yet another chance for her to practice, however, because I made her check to make sure I got the problem correct before I could move my pawn around the board. 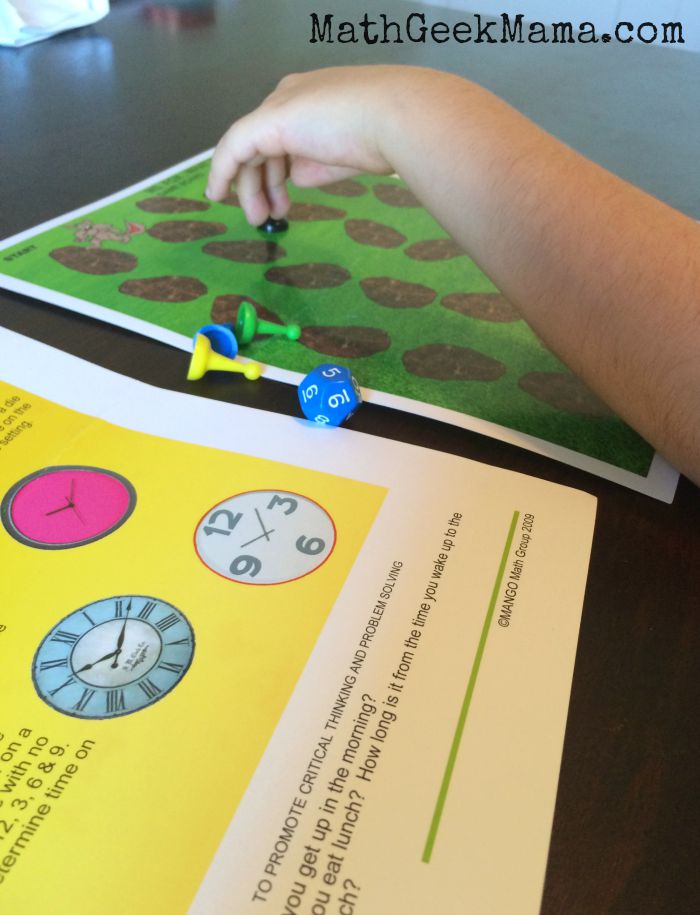 Overall, she absolutely LOVED this game. I liked that it was simple to use, set up and clean up, and that I could tailor the questions to her skill level. There were also some other ideas to extend the learning or continue to practice and discuss time problems included in the lesson, which I always appreciate. 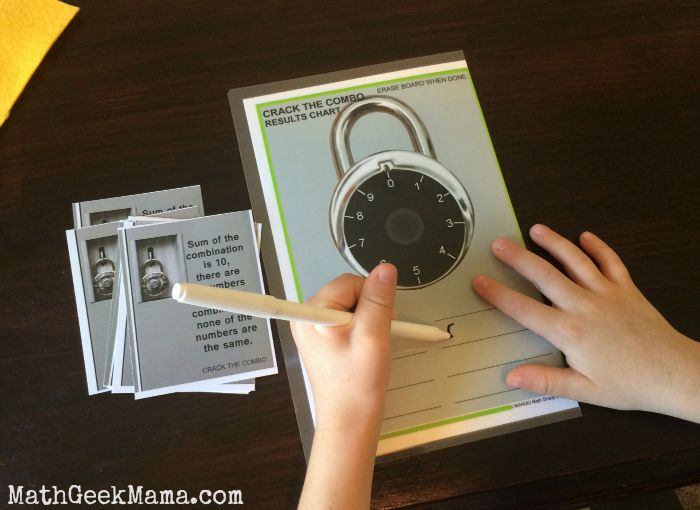 The second game we received is called “Crack the Combo,” and I loved this one! We have been working on number bonds lately anyway, so this activity was a fantastic way to expand on what she’s already learned, and force her to think outside the box.

Basically, the idea is for kids to come up with possible lock combinations given specific criteria. For example, one card says, “The sum of the combination is 10, there are 4 numbers in the combination, and none of the numbers are the same.”

We have spent a LOT of time lately working on “making ten,” so I loved this chance to try and make ten with 4 numbers instead of 2. Plus, we were then able to discuss an important algebraic property, the commutative property, which says that order doesn’t matter when adding. So when she found 4 numbers, but then got stuck trying to find another possible combination, we were able to see that changing the numbers around would also work. (For older kids, I would then challenge them to figure out how many possible combinations you can make with those 4 numbers)/

Even though I loved this lesson (and will be coming back to it again), my daughter thought it was hard. That’s not a bad thing though, and I encouraged her to press on even though it was harder than some of the other games we play. She also admitted that some of the cards were not as hard because there were fewer and smaller numbers involved, and she seemed to enjoy that more (for example, the sum of the combination is 5, and there are 3 numbers). 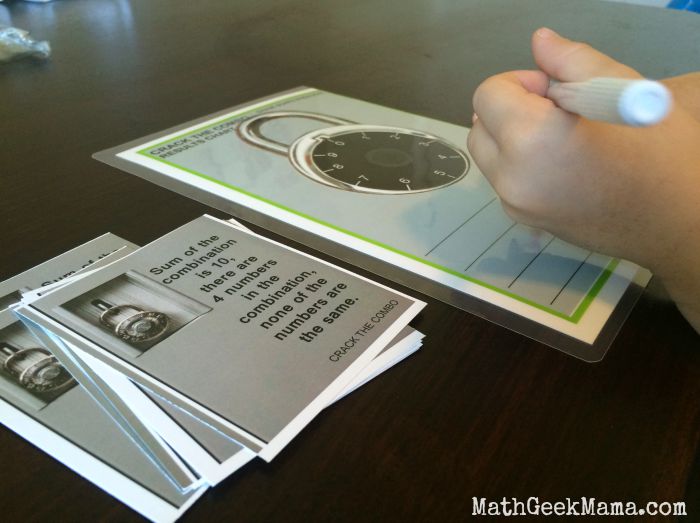 I even used this with my son (Kindergarten) by simplifying the questions, and letting him use our base ten blocks

to help him come up with “combinations.” He thought it was great fun! I think he’s much more anxious to try it again than my daughter, but he’s always more interested in problem solving and number puzzles than sitting and reading a book. 🙂 Ah, the differences between children!

As a math educator, I was thoroughly impressed with the content, instructions, and engagement of the materials. I also love that they are individually packaged in plastic, so everything stays together and requires no prep on my part, or searching for all the right pieces when I’m ready to use it.

As a homeschool mom on a tight budget, the full crate of games is pretty pricey, and not something I could likely afford as a curriculum supplement. But if this is in your budget, I highly recommend it! And if you are a classroom teacher, or after school coordinator of some sort, and you can convince your school to purchase the materials, I would highly recommend that as well!

Want to learn more? Find a list of suggested uses here, or read what others have to say here.