Let’s flip a coin to decide.

It’s a simple statement, and one you may hear often.

My favorite example of flipping a coin is at the start of an NFL game. Especially on high stake games, an expectant hush falls over the stadium as everyone waits to see which team gets the upper hand. We all know that our team has a 50 – 50 chance of winning the coin toss…but all we can do is wait for the coin to settle on the dirt.

This tradition is the perfect introduction to probability….and what we will be focusing on today. These fun coloring probability worksheets are a great way for kids to practice! 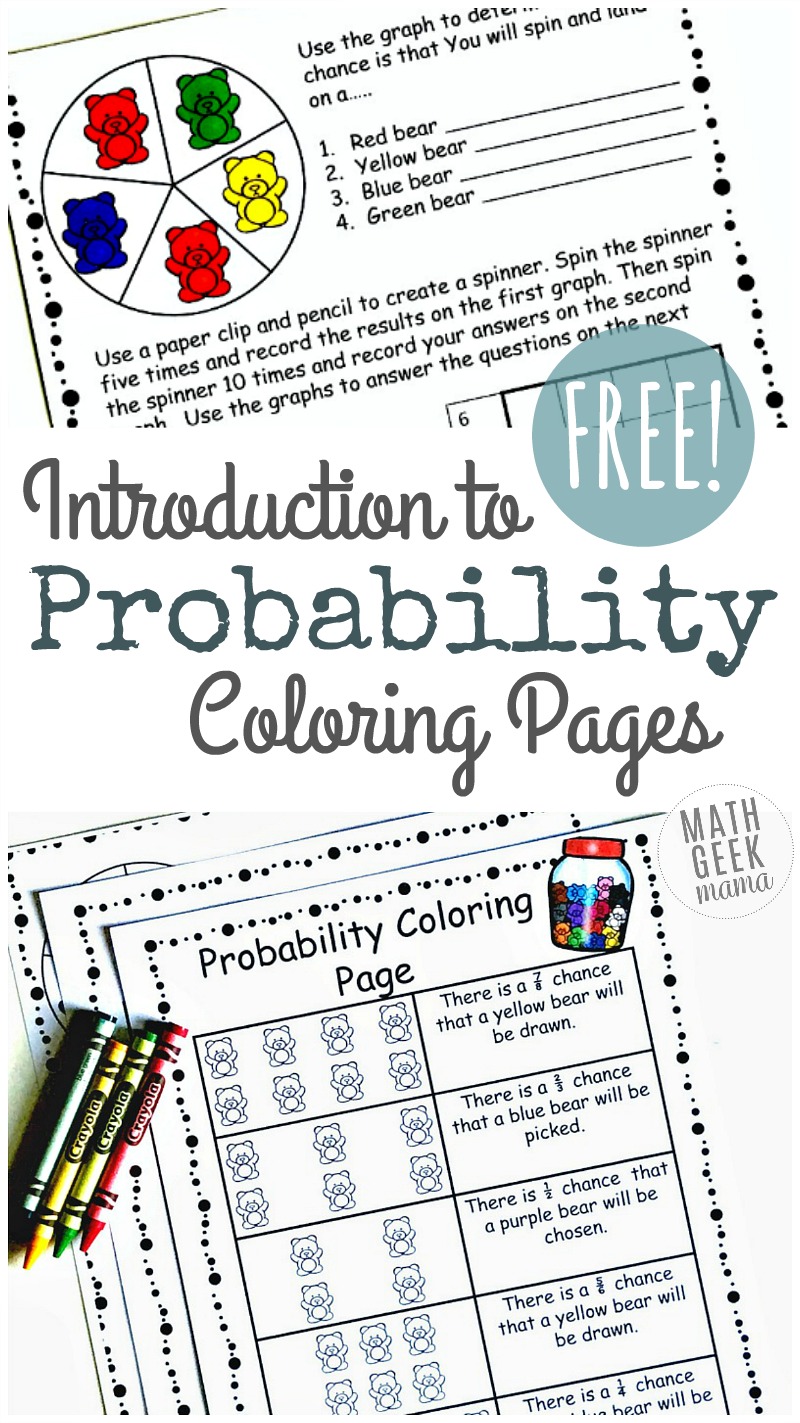 Probability according to math term definition is, “the likelihood of something happening in the future. It is expressed as a number between zero (can never happen) to 1 (will always happen). It can be expressed as a fraction, a decimal, a percent, or as odds”

What is the probability a pig will fly by? Well, we know that will never happen. So the chance this will happen written as a fraction, decimal or percent is 0. You could also say it is impossible.

To begin a study of probability is may be easier to leave the “math” out and begin with words like….

I love this anchor chart as a way to help children visualize this!

Next, comes the fun part….adding fractions. Before you can begin this, children must understand what a numerator and denominator are and equivalent fractions.

Probability is really just a fraction.

Equivalent fractions are helpful as children actually experiment with probability. They will probably not just flip a coin twice. So what would the probability be if they flipped it four times? 1/2 = 2/4 so technically speaking, I should get heads 2 out the four time I flip the coin.

After the ground work is laid, it is always fun to experiment. Create a spinner, put together a bag of manipulatives (such as counting bears, beads, unifix cubes, etc.) or grab a deck of cards for an almost no-prep probability experiment.

Begin by having the children figure out the fractional probability for each of the choices.

Next, have them begin drawing an object and graphing it.

Finally, finish up by comparing their results with what should have happened. Lots of discussions can happen at this stage!

(Grab a set of probability lessons and experiments for older kids here.)

The probability practice freebie will take your children through each of these three steps: 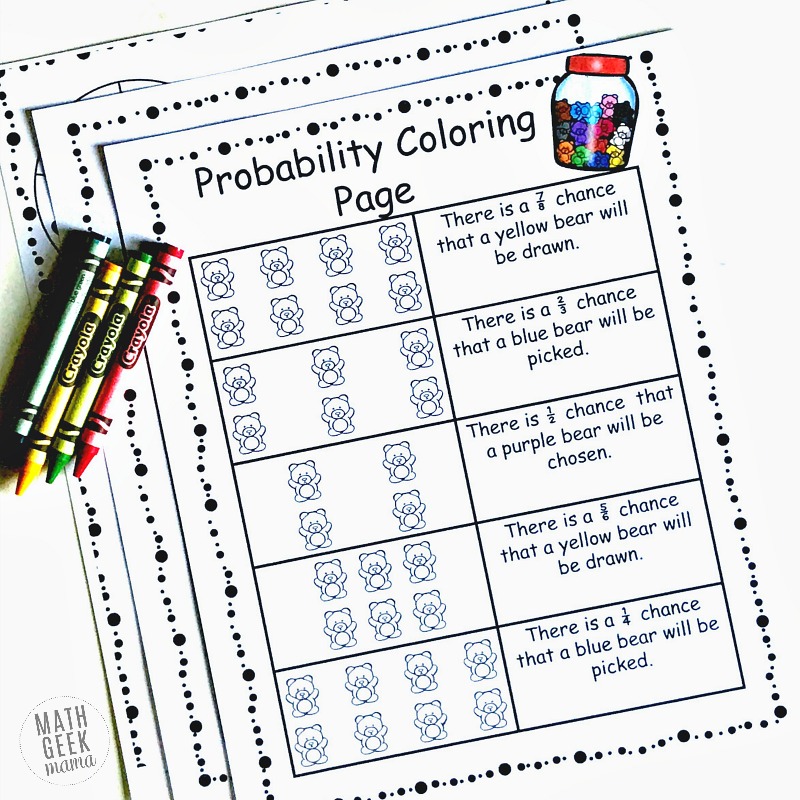 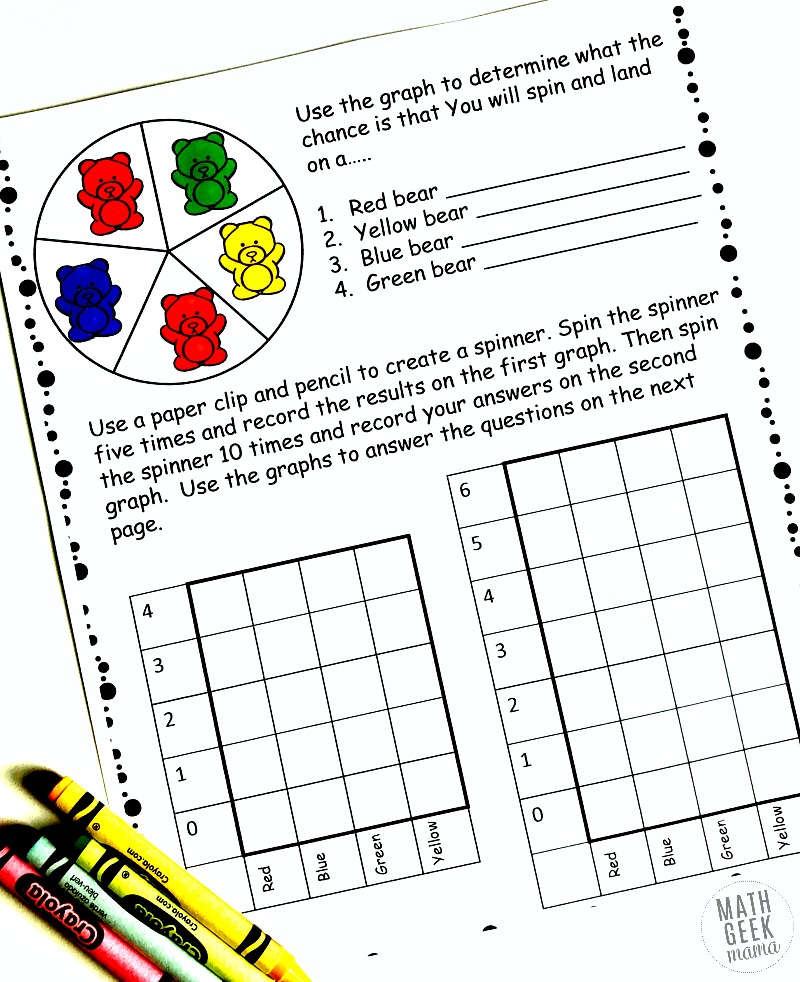 Probability is a fun topic to explore with children. Enjoy playing around with this concept using these fun, hands on probability worksheets. 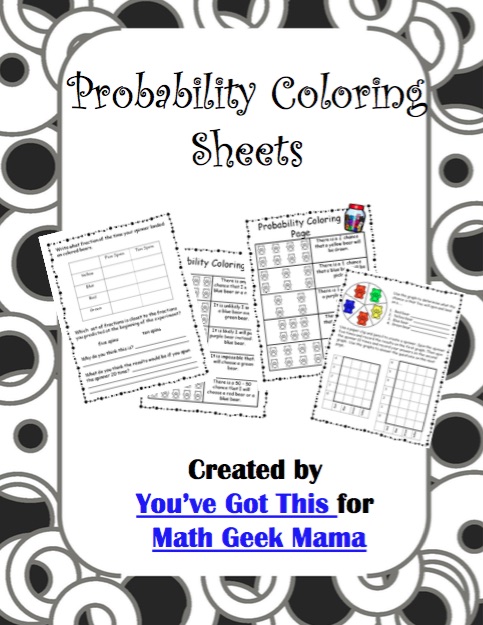 {Click HERE to go to my shop and grab the free probability worksheets!}