As you may know, we love reading at our house, and I especially love using children’s literature to teach math. There are so many great and engaging books out there, and while reading and discussing them is a great way to talk about math with your kids, I love taking the learning a step further! A book that we’ve had fun with lately as we prepare to go to the pumpkin patch is Sixteen Runaway Pumpkins by Dianne Ochiltree. This book is a great introduction to not just counting to sixteen, but doubling to get to sixteen!

tells the tale of Sam, who goes to work collecting pumpkins from the pumpkin patch

at her grandparents farm. She works hard to fill up her wagon with first one, then two pumpkins. Then she adds two more to double it to four, and so on until she has sixteen pumpkins!

After reading through the story once, you may want to go back through more slowly and ask questions each time she adds pumpkins to the wagon, such as, “How many pumpkins does she have now?” or “How many does she need to double her pumpkins?”

Depending on the age of your kids, you could even continue doubling after the story is over, or challenge your kids to see who can get to the highest number by doubling!

(another great math game that my kids love!). 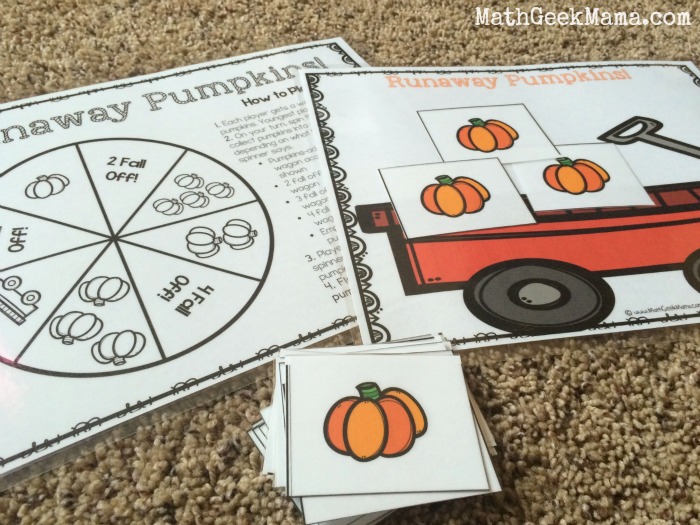 Because Sam loses her pumpkins in the story, the object of the game is to get the sixteen runaway pumpkins back in the wagon.

The printable wagons, pumpkin cards and spinner (with directions) are included in the download. I printed them in color, but a black and white version is included as well.

The object of the game is to put the pumpkins back in the wagon. So on each player’s turn, they spin a paperclip around the spinner as seen below: 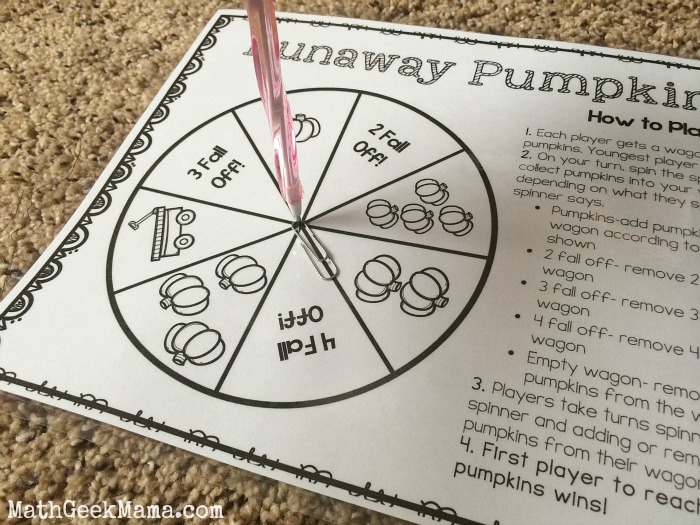 If they land on 2,3, or 4 fall off, however, they must remove pumpkins from the wagon.

If they land on the empty wagon, all the pumpkins fell out and they have to remove them all and start over.

You may need to determine beforehand what to do if there are not enough pumpkins to remove. Player can either spin again, or do nothing and play moves to the next player. I let my kids spin until they were able to do something.

First player to put sixteen pumpkins back in the wagon wins.

If you want to simplify things, you can play with a single die instead of the spinner and just have students add pumpkins to the wagon until someone reaches sixteen. This will be faster since no one will be taking away pumpkins or starting over.

For older kids, you may way to play with a die and have them double the number they roll and then add that to the wagon until they get sixteen. For example, if they roll a 2 they would say “2+2 = 4,” and then place four pumpkins in their wagon. This will allow them to practice their doubles addition facts.

You could also have older kids keep track of their addition and subtraction on a piece of paper as they go, rather than simply counting the pumpkins in their wagon. 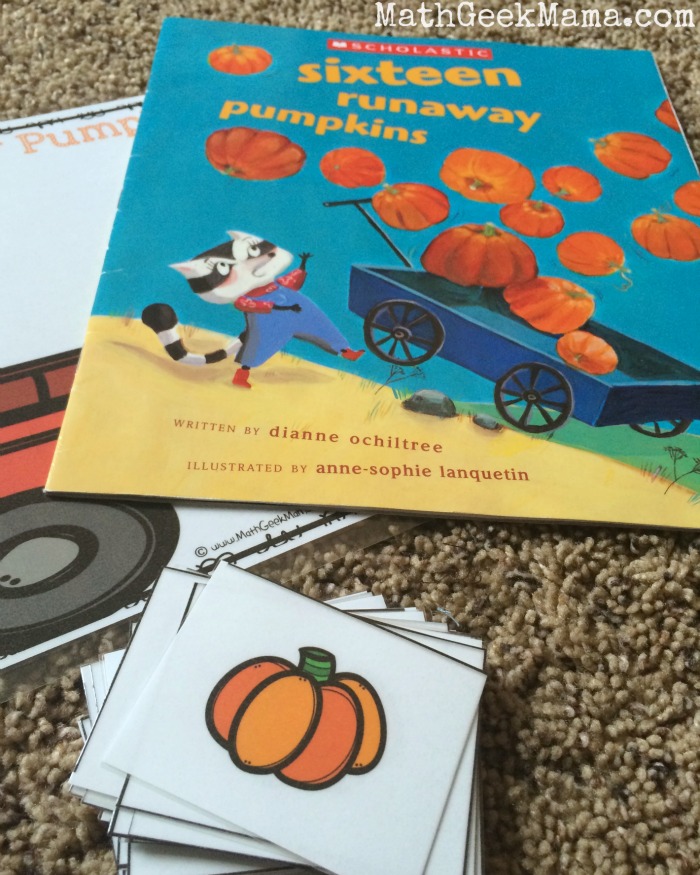 I hope you have lots of fun with reading and math! Check out this growing page for more ideas and free resources to go with fun children’s books.

Have fun learning about doubling pumpkins!