It was the turning point for me. I was sitting in a college teaching class, and the base ten blocks came out. The instructor proceeded to inform us how to teach subtraction with regrouping using base ten blocks. Though he was there to teach me how to teach a concept, he actually brought an understanding that hadn’t happened in years of schooling.

Math had never been my subject. I didn’t understand it. Definitely couldn’t do it in my head. And I was a little nervous about teaching math. But as I played with those base ten blocks that day a foundation would be laid that would change everything.

You see, I knew how to subtract with regrouping. I could cross numbers out and carry numbers all day, but it wasn’t until I sat down with blocks that I truly understood why I was doing all that. 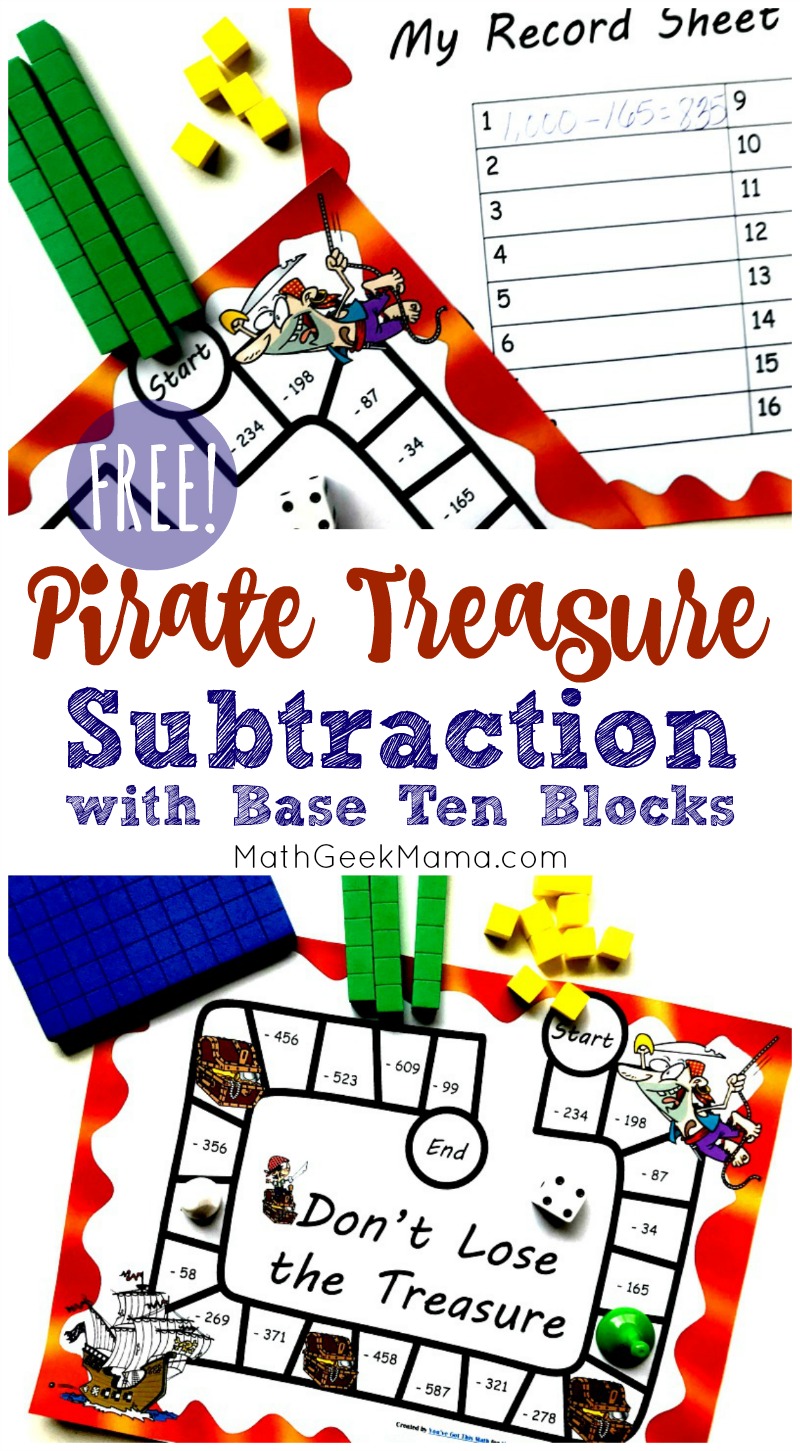 This is a guest post from Rachel of You’ve Got This Math.

I never want to teach another child and leave them in the same place I was for so many years. So what does that mean? It means that manipulatives, models, and number lines are used consistently…even with my upper elementary children.

When children can draw, manipulate an object, or show how a problem is solved, a deeper understanding is developed. An understanding that will help them accomplish higher math or even mental math.

And that is what this subtraction game is all about: practicing 3-digit subtraction with regrouping in a way that builds understanding and is FUN! 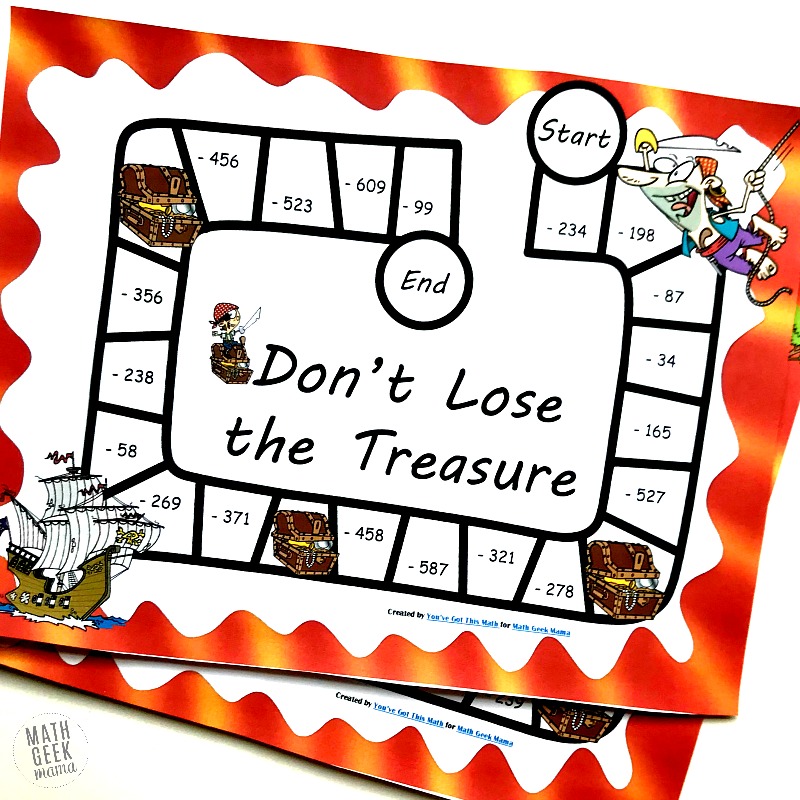 You are ready for your children to play and develop number sense.

This print and play game is simple. The object of the game is to be the one with the most ‘treasure’ (aka base ten blocks) at the end of the game. 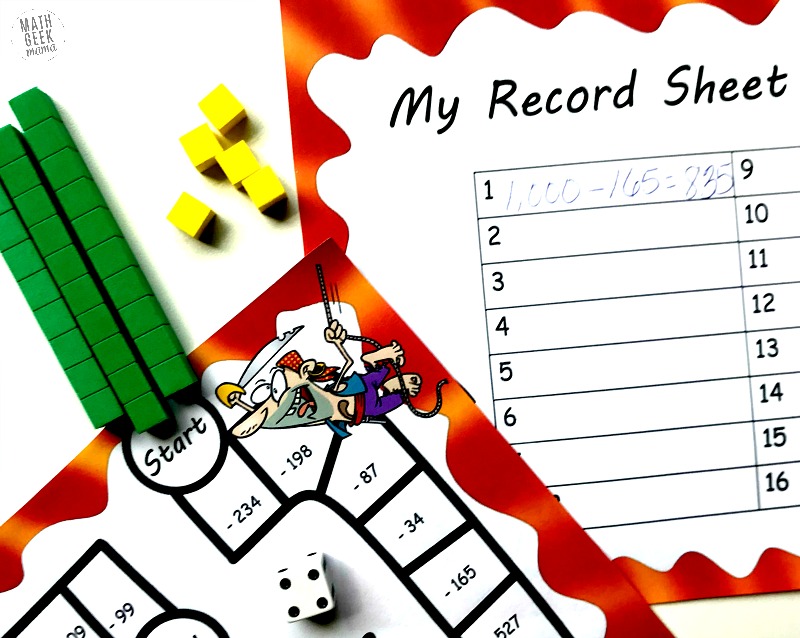 Of course, there is a small twist to the game. If you land on the treasure chest, you get to add 1,000 blocks back to your shrinking pile.

The player with the most base ten blocks at the finish wins. 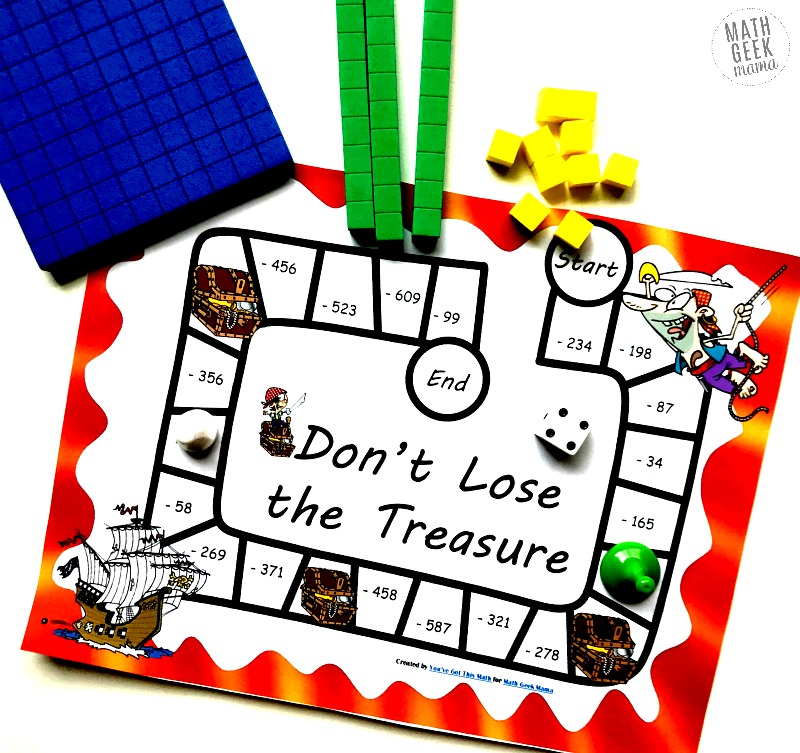 If you were like me, you may never have used base ten blocks and you aren’t quite sure how to subtract using them.

Well, let’s look at this example.

So I am starting with a large cube. That cube represents one thousand. But when it is time to subtract, I can’t take five ones from it. But we can do some trading so I can take away five ones.

First, we trade the thousand cube for 10 hundreds. I still have 1,000 total, but it is represented differently. Although I do not have any thousands now, I still can’t take away five ones.

Second, we take one of the hundreds and trade it in for 10 tens. Now we have 0 thousands, 9 hundreds, and 10 tens…but I still can’t take away five ones.

FINALLY, I can take away 165. I subtract five ones, six tens, and one hundred. And what do I have left?

This game simply has children playing with base ten blocks and subtracting them. It is the great introduction to 3-4 digit subtraction with regrouping because they are playing with manipulatives.

Find another example of how to teach subtraction with a different manipulative regrouping here.

Or try this popular post: How to End the Frustration with Regrouping

I hope you enjoy it!

{Click HERE to go to my shop & grab the FREE 3-Digit Subtraction with Regrouping Game!}