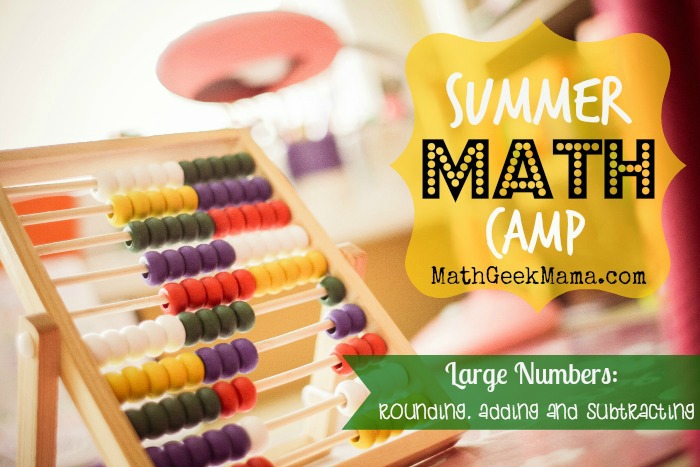 I’m so excited to share with you a really fun event that I’m hosting at my house this summer! I’m teaching and reviewing some important third grade math skills to a wonderfully sweet group of girls, and I want to share my plans, games and ideas with you!

We are meeting for one hour each week, so it’s not a huge time commitment, but I hope to cover as much third grade math as we can over the summer to help them keep up their skills, and maybe better internalize some of the concepts that they struggled with during the school year.

And even though we do have to work on some difficult math concepts, and my goal is to help them see their mistakes and learn from them, it is summer vacation, so I’m all about trying to make it FUN!

My goal is to have a set skill that we focus on each week, and then build on that as the summer goes on, rather than doing a hodge podge of random problems and games. I want to help them focus on conceptual understanding, rather than just practicing lots and lots of math problems each week. I’m basing our focus areas on third grade common core standards, but these activities could work with grades 2nd-4th, depending on their level and ability.

Warm Up– To help the girls settle in and review place value, I let them work on these expanded number puzzles. I printed and laminated

them before cutting them out, and I was excited to see that they LOVED them! 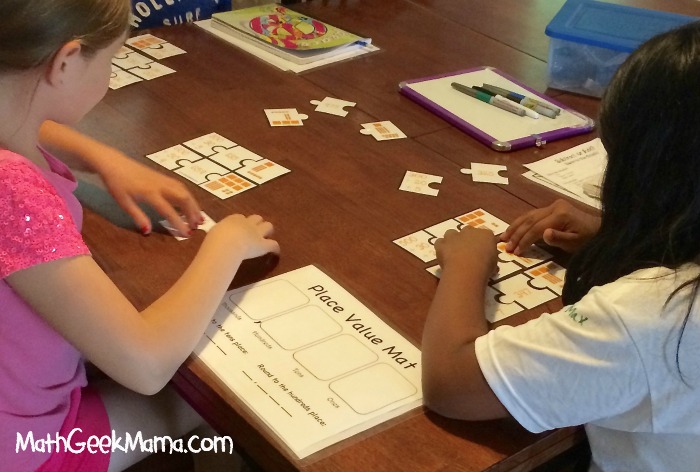 Then we moved on to a simple place value game that I created that allowed them to compare large numbers and then round to the tens and hundreds place. We were able to cover so much math in such a simple game!

All you need is a deck of playing cards

(remove face cards and tens; we used “ace” as zero), and this handy dandy printable (again, I laminated 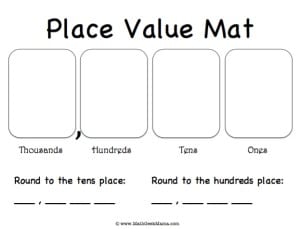 After decided who would choose first, the girls went around the circle drawing a card from the deck. Each time they drew a card, they had to place it in on of the spaces on their mat, and then it could not be moved. So, if they drew a high number and placed it in the tens place, and then drew a low number, they could not switch them.

The goal is to make the largest number possible, so they had to think about where to place each card that might make the most sense.

Once they “built” their number, they had to round it to the tens and hundreds place on their mat using a dry erase marker.

Once everyone had their number and finished rounding, they would line them up and compare. They had to decide and agree on who had the largest number and explain why, and then that person would receive a point.

After calculating points, we erased the board, shuffled the cards and played another round!

After several rounds, the player with the most points wins!

I was surprised to find that none of the girls had any knowledge of rounding, so we had to stop and review after the first round. But that was ok! It was good for me to see what they do and do not know, and now I know to come back to that to review at some point later this summer.

After the place value game, it was time to move on to adding and subtracting, which the girls were very excited about, as they all felt very confident! I created another game to review these skills, but first wanted to make sure they understood subtraction with “borrowing” or “regrouping.”

So we pulled out some base ten blocks

, and built numbers to review subtraction! I explained in a way similar to how Becky did here with legos. (In the past, I have also used dimes and pennies to model subtraction with borrowing, and that seemed to work well also!). If you would like the chart I used to practice, you can download it here:

Even though the girls were confident subtracting when they had to “borrow” or “regroup” once, it was much more of a challenge when they were dealing with large numbers and had to do so multiple times in one problem.

If your child struggles with this as well, help them to think through each step in a similar way: one thousand = ten hundreds, and one hundred = ten tens, so what are you adding to the hundreds or tens when you “borrow,” etc.? The concept is the same, but it can get confusing for young learners when the numbers are so big.

Again, this is why we started by reviewing place value, and thinking about numbers in their expanded form. So when it’s time to subtract the following: 4123 – 568, they could think about the first number as 4000 + 100 + 20 + 3 to help them work through the “borrowing” and what’s really happening when they change the 4 in the thousands place to a 3. 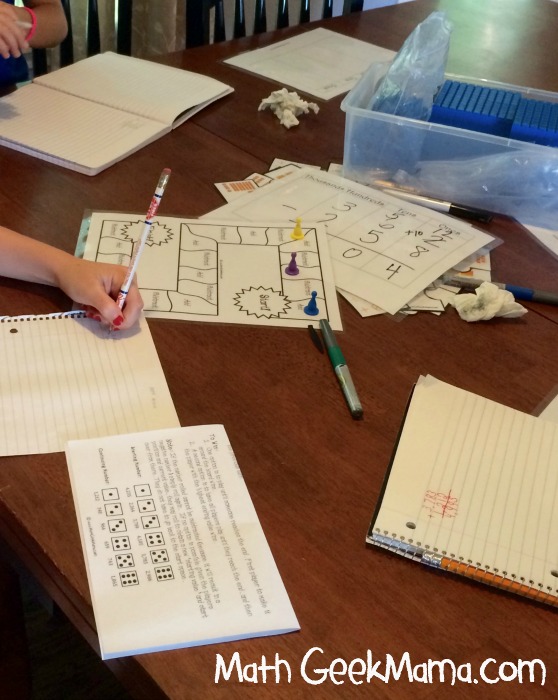 We then ended with what I thought was a fun game to continue honing those addition and subtraction skills, which I will share with you tomorrow! 🙂

So be sure to check back, because I will explain the details of the game, as well as a free printable game board!

I hope you’re having a great summer so far, and can use some of these ideas or others that I’ve posted to help your kids keep up with math over the summer!

*Please Note: Some of the links on this post are affiliate links and help support the work of this site. Thank you for your support! Feel free to read our full disclosure policy here.*