It is designed to allow children to build some background knowledge about adding fractions and mixed numbers. By using their knowledge of fractions and pattern blocks, children will add fractions with unlike denominators (like 1 1/2 + 2/3) as they race to be the first to six. 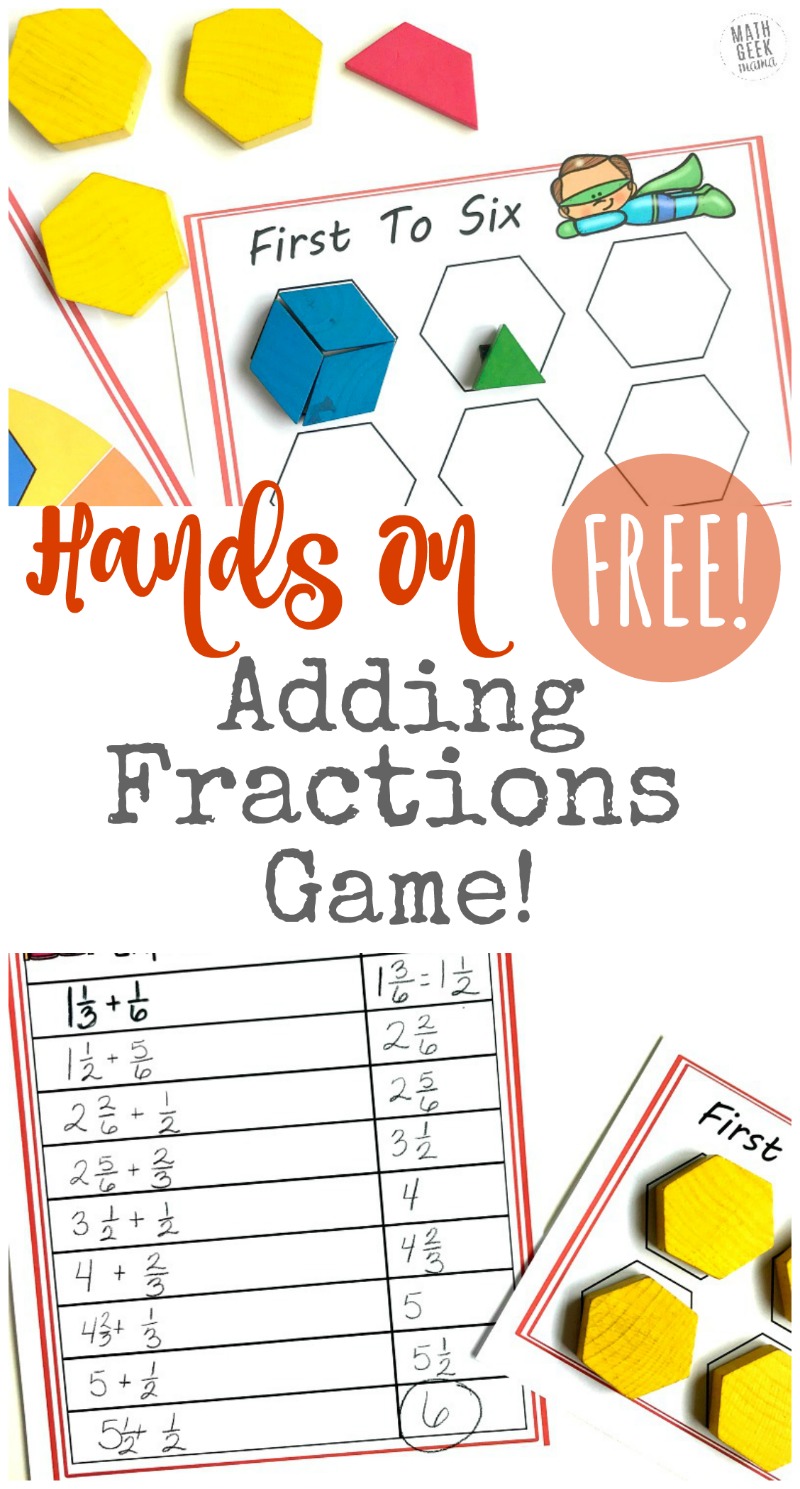 Then you’re ready to play and learn about fractions!

How to Play this Adding Fractions Game:

The premise is simple.

The students will take turns spinning. Whatever they spin is the number of pattern blocks they add to their game board.

The first player to fill up their mat (get six wholes) wins the game.

The catch is that while doing this, they must show what they are adding on their record sheet. 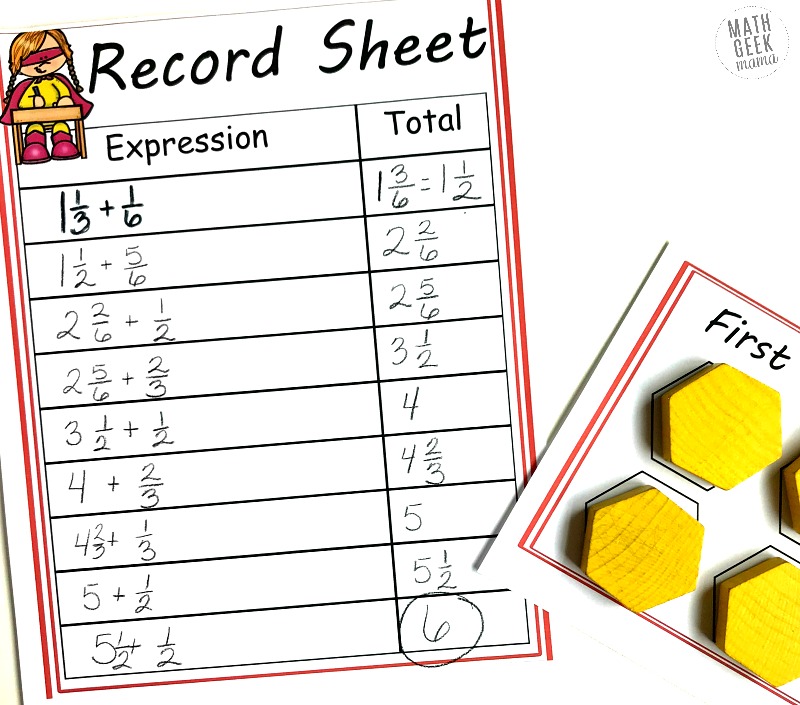 Adding Fractions with Unlike Denominators:

Let’s say a student has already filled up 1 1/3 of their mat.

They then role a triangle….and we know that a triangle is 1/6 of a hexagon. 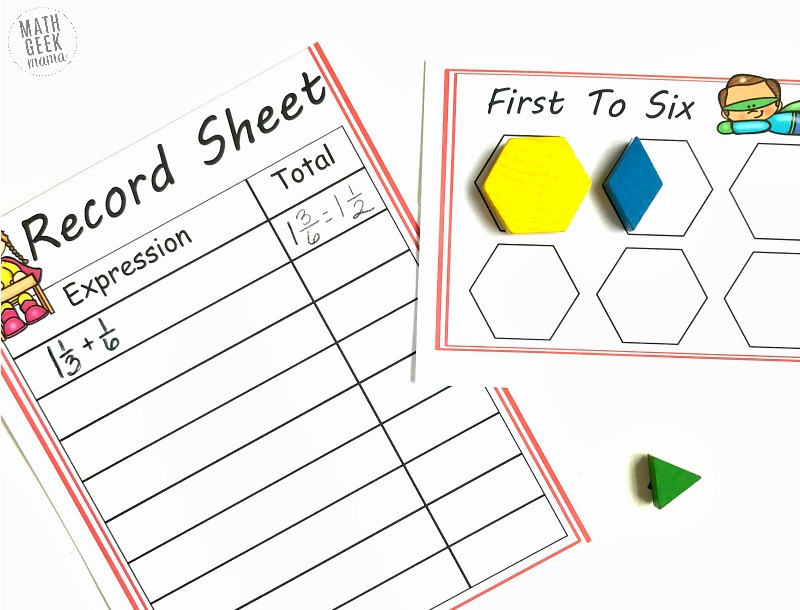 So, on their record sheet, they would write

Then they figure out how much of their mat is filled. Well, looking at this example we can see that 1 1/2 of the hexagons are filled up.

The children keep spinning and adding up their answers until a player reaches six wholes.

There is so much math happening in this game, but the most obvious is adding fractions.

When we teach little ones to add, they are provided manipulative upon manipulative. They count up blocks, teddy bears, pictures on task cards, and so much more.

As children become older, we often forget that they still need manipulatives to be successful and develop math sense.

Pattern blocks are a wonderful way for children to visualize fractions, and they are also great to teach adding fractions.

But as the game progresses, they will be adding mixed numbers with uncommon denominators…and surprisingly it won’t be hard.

Why? Because the work has already been done while they work with the pattern blocks.

Assuming that the hexagon is our whole, children will be able to figure out what parts each pattern block makes up.

For example, you need two trapezoids to fill up a hexagon, so one trapezoid is 1 out of the two needed to make a whole….1/2.

Three rhombuses must be used to make a hexagon. Therefore the denominator will be three, and the numerator based on how many rhombi. One rhombus equals 1/3 while two rhombuses equal 2/3.

I love using pattern blocks for equivalent fractions. Once again it the perfect visual!

Let’s say I have two-thirds of a rhombus filled up, and I roll 1/2. Well, it is easy to see that that trapezoid is not going to fit on that hexagon. So some exchanging is needed.

We could use three triangles to make a trapezoid, showing us that 1/2 is equal to 3/6. 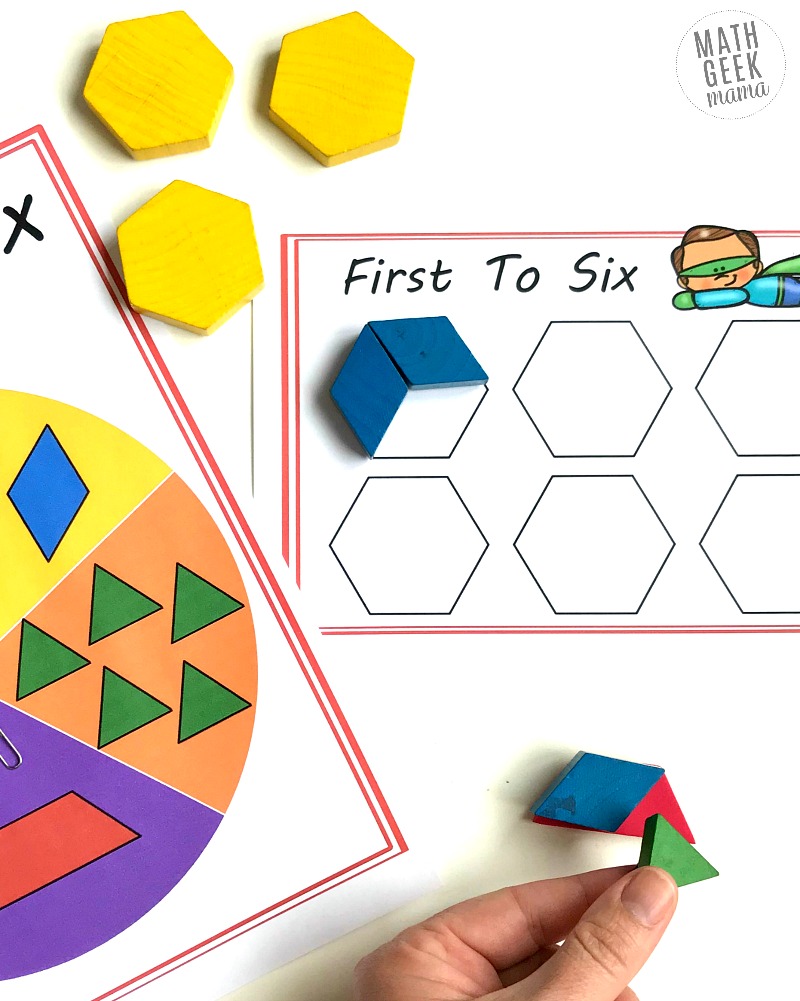 Or we could use one rhombus (because 1/3 and 2/6 are equivalent) and one triangle.

{Click HERE to go to my shop and grab this FREE Adding Fractions Game!}