Are you familiar with the fun kids rhyme, Ten Little Monkeys Jumping on the Bed? I’m sure you’re familiar with at least some version of this, and probably sing the song or read the story with your kids. Well, since this is a great opportunity for math and counting (count to ten or count backwards from ten as those monkeys fall off the bed!), I just had to make a math game for my kids! The great thing about this game, Ten Little Monkeys Jumping On the Bed, is that you can play with kids of all ages. There are tons of variations, so read on to learn how! 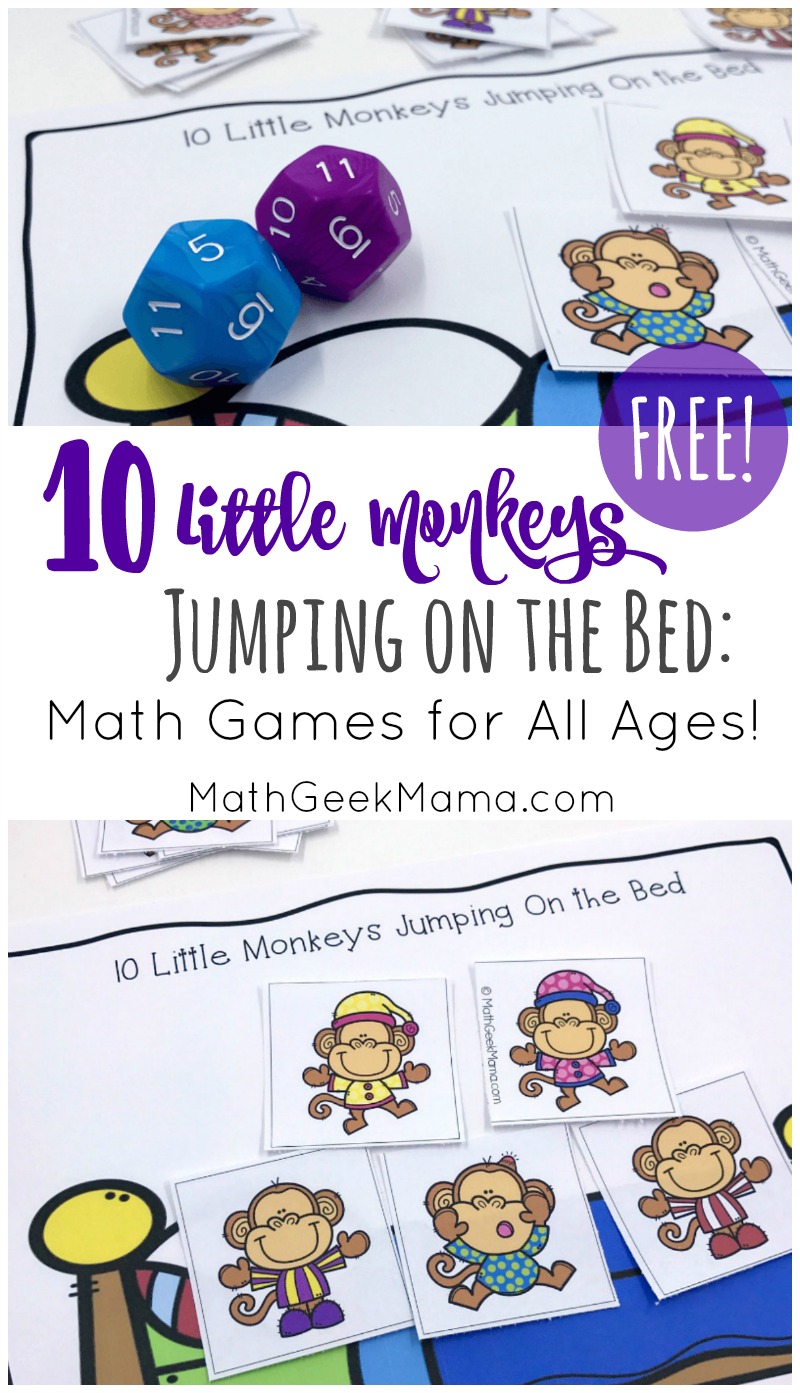 The basic premise of the rhyme is that there are ten little monkeys on the bed, and one by one they fall off.

So for this game, the ultimate goal is to be the first to get exactly ten monkeys back on the bed. (Or if you’d rather, start with ten and work backwards. Then the winner is the first to remove all ten monkeys.)

Setting up the game is really easy. Included in the download is a game mat with a bed. Print one copy for each player. 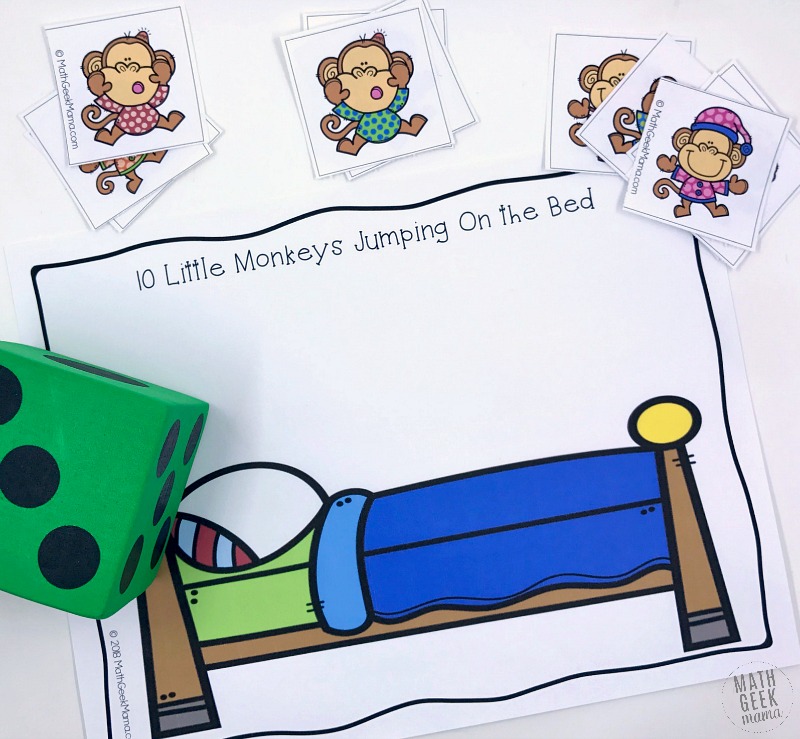 Then you will need to print the monkey game cards. I suggest printing them on card stock and laminating for durability.

Then cut out the monkey cards, grab a set of dice and you’re ready to play!

For your youngest learners, you can use this to simply practice numbers and counting.

If they roll a number that will put them over ten, they lose that turn and the next player can roll.

The first player to have exactly ten monkeys wins!

For older kids, you can use two dice. When they roll, they would then perform the chosen math operation (addition, subtraction, multiplication, division) with the numbers they roll (choose this beforehand).

For example, if you want them to practice addition, they would roll two dice and add the numbers together. 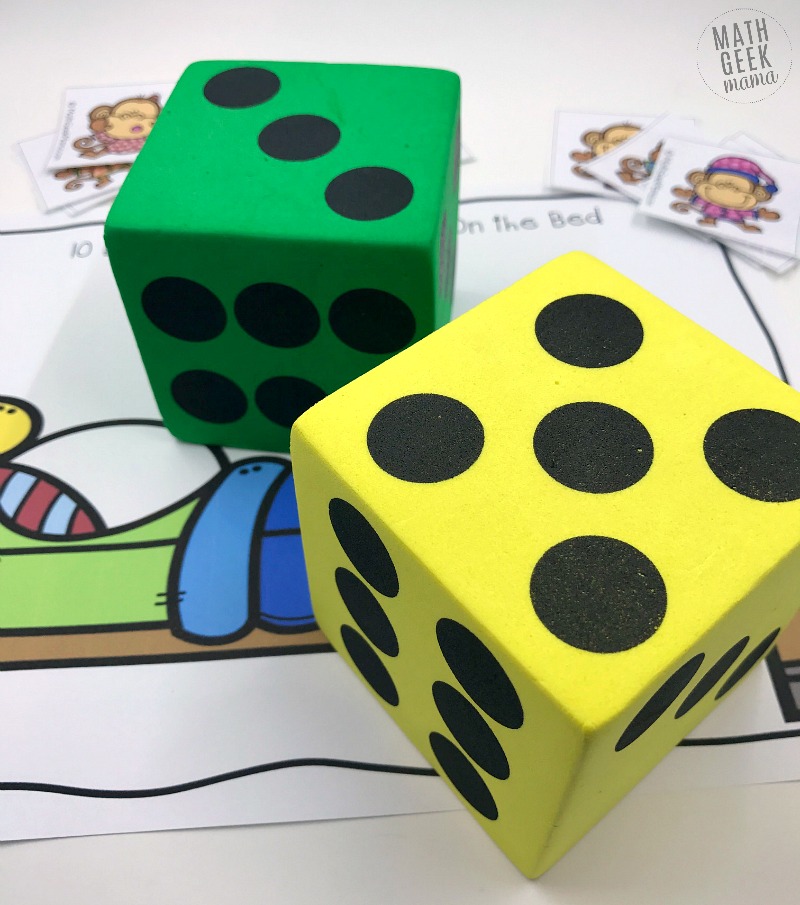 If you want them to practice multiplication, they would multiply their two numbers together.

After performing the given operation, if the solution is even, they add a monkey to their game board.

If the solution is odd, they do not do anything and it’s the next player’s turn.

Again, the first player to collect exactly ten monkeys is the winner! 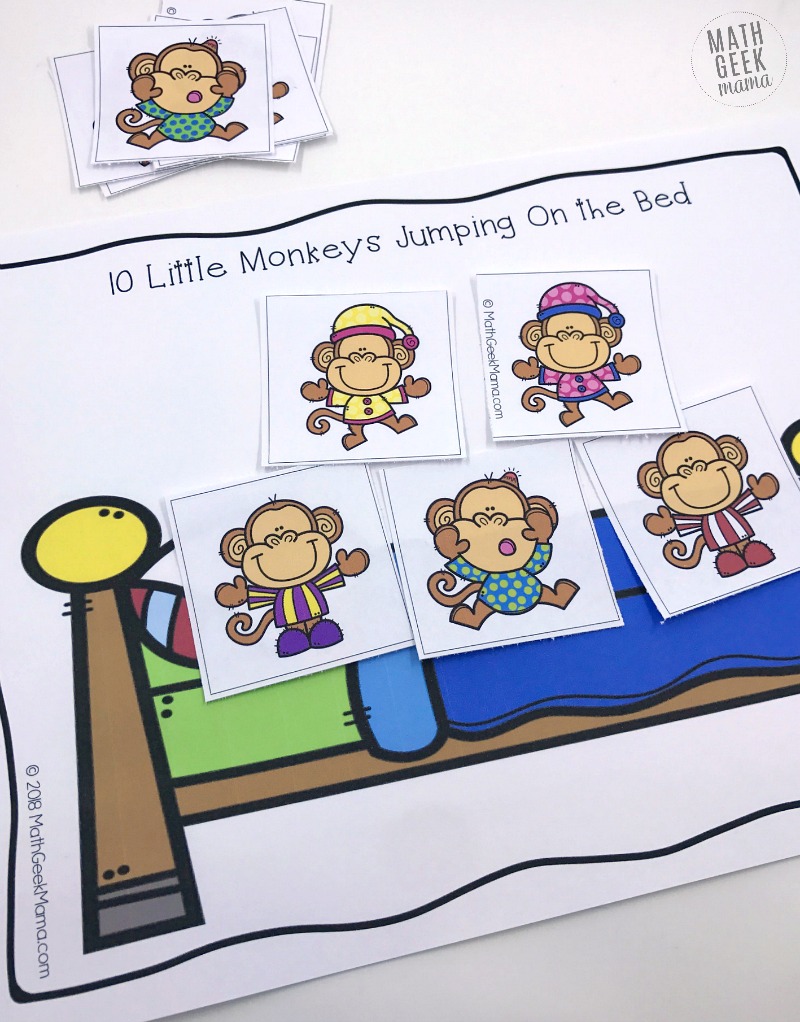 For an added challenge, use two 12-sided dice rather than standard, six-sided dice.

Game Variations for Middle School & Beyond:

For older kids, the basic game structure is the same. You can simply increase the difficulty of the math involved.

For example, use two different colored dice and designate one as positive numbers and one as negative numbers. Then have kids practice operations with integers as they play. 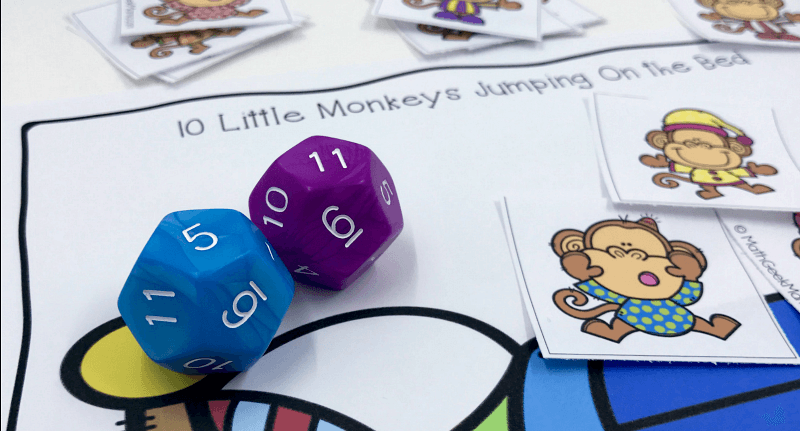 You could also use a deck of cards with the face cards removed. In this case, red would be negative numbers and black positive numbers.

On each turn, they draw two cards and perform the chosen math operation.

Using playing cards will create more of a challenge, because they can choose multiple combinations of integers, rather than always having one positive and one negative (with two different colored dice).

The great thing about this game is that you can have kids of different ages playing together at the same time.

Because the goal for everyone is to be the first with ten monkeys on their game board, you can simply assign different math challenges for each child.

Each child can work on a skill that is on their level, while they all race to be the first with ten little monkeys.

The only thing I would note is that if you have a preschooler who wants to play along, you may want to adjust the rules for them a bit. The reason is that everyone else can only add one monkey at a time as they play.

But a preschooler could potentially get ten monkeys in just two turns. 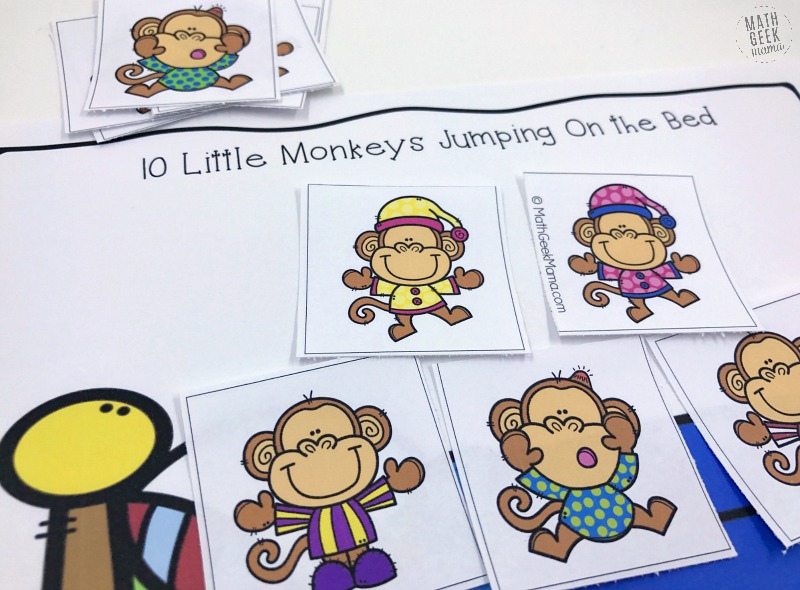 Or you could adjust the game for them to add and take away monkeys on the same turn. Either give them two different colored dice and say, “The green shows how many monkeys you add to the board, and the yellow shows how many you take away.”

Or simply have them roll a single die twice each turn. On the first roll, they can add monkeys to their board, and on the second roll, they have to take some away.

However you choose to incorporate this game, I hope your kids have fun with it! And the great thing is, you can play one variation one day, and then something different the next!

Have fun practicing math facts with this simple, versatile game!

As a fun introduction to this activity, check out some of these cute books with variations on this fun rhyme! 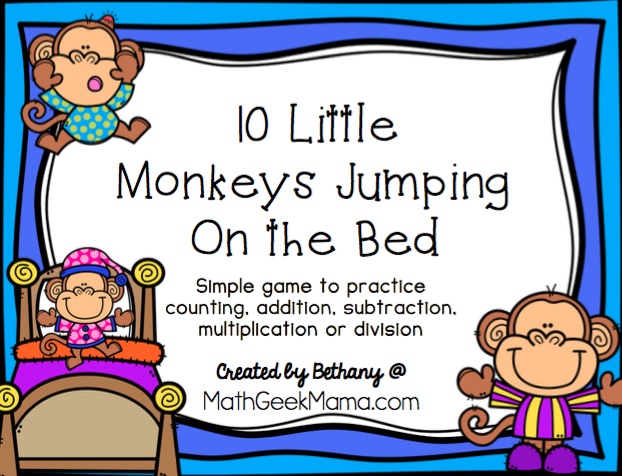 {Click HERE to go to my shop and grab the FREE Ten Little Monkeys Jumping On the Bed Math Game!}