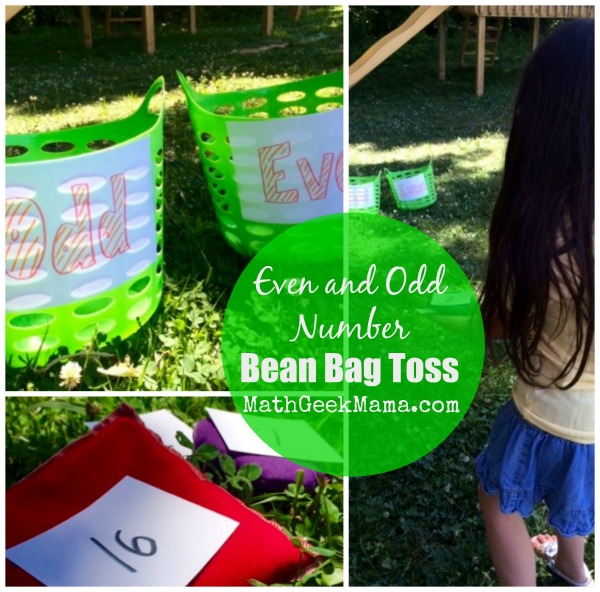 To continue our math review using games outside, I decided to review skip counting by two’s and knowing the difference between even and odd numbers. Obviously, my daughter is too young to understand that a number is even if it is divisible by two, but she does understand skip counting and how to use that knowledge to determine even or odd.

Rather than simply sorting flashcards into piles of even numbers and odd numbers, I thought it would be more fun to make it into a bean bag

toss game! It was SUPER easy to throw together, and took literally 3 minutes to prepare. All I did was write even and odd on two pieces of paper and tape them to baskets (from the dollar store). 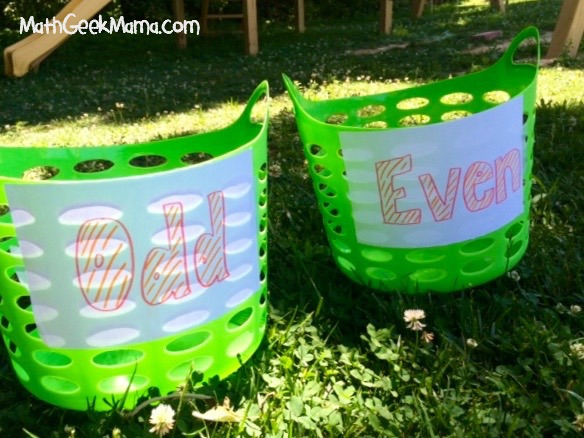 Then, I cut index cards in half and wrote various numbers on them starting with single digit numbers and increasing to 2, 3 and 4-digit numbers. I made sure to include a mix of even and odd numbers, as well as several ending in zero. I then taped the numbers to bean bags

to try and throw in the baskets. 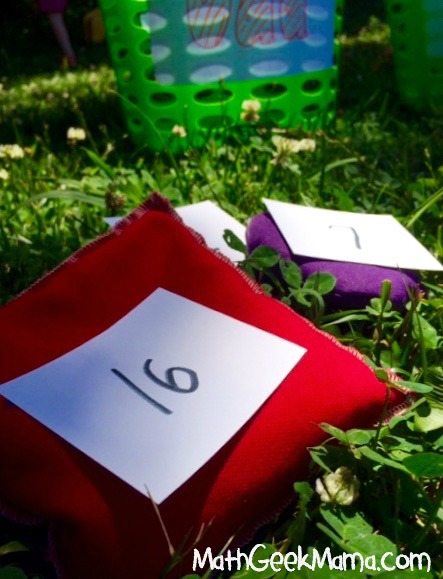 Before we began playing, I asked her if she remembered how to determine if a number is even or odd and she replied, “It’s even if it’s in the two’s.” So when she first began to play, she would count by two’s until she got to each number (or not, in which case it would be odd).

The problem came when I challenged her with larger numbers. You can’t realistically count by two’s all the way up to say, 564, to determine even or odd. So then we talked about how the unit’s place is “the boss” when determining even or odd. 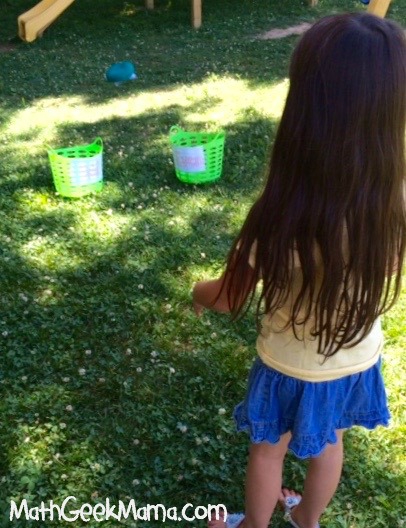 Then she had no trouble, and she and her siblings (who didn’t really understand what was happening) continued throwing beanbags  in the baskets! 😉

As I suspected before we started, one issue that we had to discuss was numbers ending in zero. So I asked her again what it means to be even, and had her count by two’s. When she got to 10, we stopped and looked at the number 10 (noting that it is even and ends in zero). Then we kept going and counted by two’s to 20 (noting again, it is even and ends in zero). So we concluded that a zero in the units place also indicates an even number.

Overall, I felt like it was a good review for her, and a great opportunity to take math outside! What do you think? Do you have any other fun, educational games to play with bean bags